Rosemount residents in Dundrum are celebrating after a breakthrough following protests. There is a building site in the middle of the Rosemount estate developing 44 new social housing units, and residents have been holding protests recently over health and safety concerns and access issues because of the construction work.

The residents reported that the construction traffic is causing the roads and paths to be impassable for the elderly, disabled, parents with buggies and emergency vehicles.

The Rosemount Residents Association (RTRA) reported that a fire brigade had recently tried to reach houses in Rosemount Glade and had access issues, and in a separate incident a child was “nearly struck by a lorry mounting the path”.

The group also recently reported that a wheelchair had to leave the footpath due to “serious damage caused by construction vehicles” and the person was “narrowly missed being hit by a cement truck”.

They also reported a rat infestation problem as a result of some bins not being collected in Rosemount Glade because of access issues for bin collecting trucks.

At the end of June, the RTRA and local councillors attended a meeting with Dun Laoghaire Rathdown County Council (DLRCC) aiming to resolve the issues.

After the meeting the RTRA said they were not happy with the outcome of the meeting and decided to organise a series of protests. 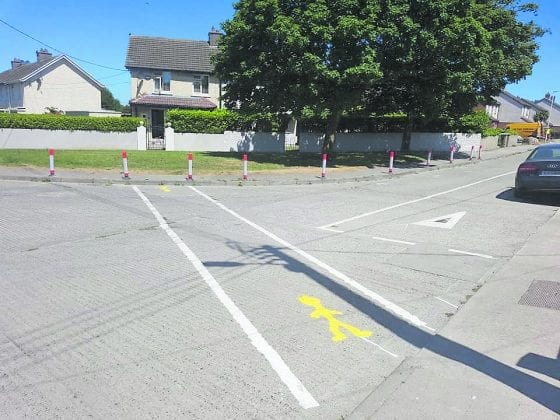 At the time, a concerned resident told Dublin Gazette the residents did not want it to come to a protest but that they would continue the protests until they have their “demands met” and the area was made “safe”.

A week after the protests the RTRA said that DLRCC had taken action on their health and safety concerns.

One of the members of the association, who wishes to remain anonymous, told Dublin Gazette that they fitted bollards, the ramps are going down this week and that double yellow lines and road markings are being implemented.

He also told us that the rat problem is being tackled: “The builders have said they are going to get one of their guys to wheel down the bins on a Monday morning for the elderly residents up the back where the bin [collectors] can’t get into.

“It’s only about 10 houses but it will stop the bins building up and the rats breeding.”
He said although it was unfortunate that it had come to protests, he was delighted that the concerns of the residents were heard.

“Fair play to the council and to Townlink [the company employed by DLRCC for the project,]. Finally, they came to their senses.

“Hopefully when we meet them the next time we can work together. It doesn’t have to be bumping heads. You achieve much more if you work together rather than fighting against each other. We have no intention of fighting anybody.”

On the RTRA Facebook page, the group said: “Fair play to Townlink and also DLRCC . Looks like the road safety of the community has been now improved and that is down to the hard work of the local residents. Well done everyone. Great community spirit.”

A council spokesperson said every effort has been made to make sure access to the estate is kept.

“Staff from Dun Laoghaire-Rathdown County Council met locals from Rosemount to have a discussion around their concerns and to establish what could be done to assist.

“There is a development of 44 houses been undertaken in the area and with any development it brings additional heavy traffic to an area. A number of different concerns were raised mainly around access issues to the estate.

“Every effort has been made by the council to ensure that access to the estate is maintained.”

Felled trees and an illegal fly-tip, a “neglected”...

DLR could be first council to ban sale...

Hundreds protest to save school pitches

11/10/2018
We use cookies to ensure that we give you the best experience on our website. If you continue to use this site we will assume that you are happy with it.Ok