Top Posts
Dig Deep, Remain Steady: Mary Lou McDonald speaks...
The Liberties say farewell to comedian Brendan Grace
Some of the world’s biggest acts to hit...
We’re Confused Too: Dublin Gazette dragged into Election...
Win tickets to Coldplay at Croke Park #NOW...
Wines for your wedding – Why It’s Wise...
When Deciding And Doing Goes Hand-In-Hand
Anorexia And Bulimia Not The Only Eating Disorders
Janey Mac, I’m getting married!
Gaels Don’t Want To Create A Storm On...
Aisling wins €15,000 and the chance to have...
Woodbine Park Post Office Closing Its Doors
Strong Opposition To Privatisation Of Leisure Centre
Boden Power through go ahead Senior Hurling Championship...
Peter ‘Franc’ Kelly On What To Do When...
South Dublin This Week

A visually impaired sailor and his crew will be sailing into Dun Laoghaire harbour on Sunday, June 4 as part of a sailing trip around Ireland to promote sailing for people with disabilities.
Chris Egan, who is a client of Irish Guide Dogs for the Blind, was diagnosed in 2015 with Retinitis Pigmentosa – a rare genetic disorder that causes significant visual impairment and will eventually rob him fully of his sight. 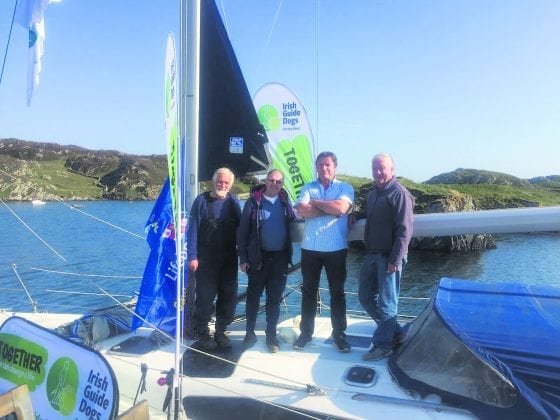 Chris and his crew on board their yacht

Chris decided that he was going to fundraise for the charity whilst also raising awareness of sailing for people with disabilities, and he came up with a plan to sail a 34ft yacht around Ireland from May through to July.
He said: “While undergoing training with Irish Guide Dogs, I came to experience first-hand the amazing work being done by this organisation of volunteers and staff alike in helping visually-impaired people to transform their lives, and to learn the skills required to lead a normal working and social life.”

Inspired by this experience, Chris was determined to find a way that he could raise funds to help Irish Guide Dogs continue with its valuable work.
He enlisted the volunteer efforts of his sailing friends from Foynes Yacht Club for the challenge, with their trip beginning in Limerick earlier this month, where it will also end in July. 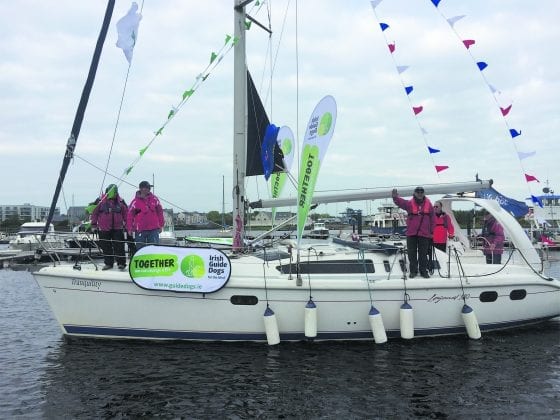 Some of their other stopovers include Galway, Waterford, Cork and Kerry.
Chris will be escorted into the East Pier in Dun Laoghaire by a flotilla of yachts on the day, with the crew expected to arrive at 2pm, depending on the weather.
Senator Victor Boyhan (Ind) told The Gazette that he was looking forward to seeing Chris sail into the harbour, and added: “It would be great to have a good crowd there to cheer Chris ashore and to show our appreciation of his effort on behalf of Guide Dogs for the Blind and the RNLI.”

Fast and furious start to Ras 2017

Lambert to step down after 17 years at helm