Some 540 affordable homes could be built in Shankill under a radical cross-party proposal to tackle the housing crisis in Dun Laoghaire Rathdown.

Councillors Michael Merrigan (Ind), John Bailey (FG) and Shane O’Brien (SF) say they’ve “put their political differences aside” in a bid to find a solution to the crisis.

The councillors have prepared the proposal in recognition of the council’s obligations for the delivery of social and affordable homes in mixed-tenure development, as set forth in Rebuilding Ireland, and the council’s own housing strategies.

The trio say that the availability of council-owned land at Shanganagh Castle – the site of the former open prison – is the essential driver of the proposal.

The plan was presented to Philomena Poole, the council’s chief executive, by these three councillors along with FG councillors Jim Gildea and Marie Baker at the end of August, with an agreement reached to further develop the idea.

Cllr Merrigan told The Gazette: “With the adoption of the Woodbrook-Shanganagh Local Area Plan, 2017-2023 at the July council meeting, we immediately decided to research and develop an innovative, imaginative and realistically sustainable model for the delivery of social and affordable homes on the council-owned lands at the former open prison site at Shanganagh Castle.” 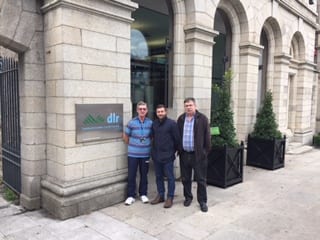 Cllr Bailey said that he and Cllrs Merrigan and O’Brien “put their political differences aside” to find a solution to the housing crisis in Dun Laoghaire-Rathdown.

He added: “We sought to assist the council’s executive in its endeavours to meet the council’s obligations as a housing authority and committed ourselves to finding a deliverable solution to the current crisis in housing supply and homelessness.”

Cllr O’Brien said they had to “think outside the box” when coming up with ideas, adding: “We decided to think outside the box in our efforts to get a speedy and efficient delivery of quality homes, social and affordable, in a mixed-tenure development based on the continental urban village design model as representing the most appropriate design for the Shanganagh Castle site.”

If the project goes ahead, 540 homes could be delivered in DLR.

Clondalkin becoming a magnet for foodies