The overflowing state of the Bring Centre at Balally is causing problems in the area, and local Cllr and General Election candidate, Lettie Mc Carthy (Lab), has expressed her concern about this potential health hazard.

She said: “Bring Centres can be a convenient service for local residents, but when it is abused to the extent as the one in Balally, we simply can’t ignore it. 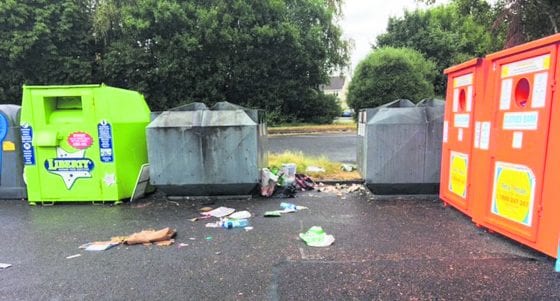 “It is unacceptable to expose this sight to residents, business and Church goers which unfortunately is becoming a regular occurrence. I have received complaints from residents on numerous occasions and dlr have committed to emptying them once a week and keeping the area under review, but obviously this isn’t enough.

“Two of the clothes banks were blocked due to people using bags that are too large and the clear bottle bank was also full, but this doesn’t excuse the many cardboard boxes and plastic bags that were left lying around.

“If users aren’t more respectful of the facility and the area, the only option will be to install cameras and start issuing fines or alternatively, remove the facility altogether but we cannot allow this to continue.”

Gardai investigating after men attempt to lure children into car

10/12/2019
We use cookies to ensure that we give you the best experience on our website. If you continue to use this site we will assume that you are happy with it.Ok