Two incidents involving jet skis took place in Dun Laoghaire late last week as the Coast Guard and the RNLI were kept busy.
The first incident took place on Friday when two jet skis and two powerboats were operating dangerously close to swimmers at Coliemore Harbour.
The second incident which took place on Sunday, saw two jet skiers who were not wearing wet suits or life jackets, stranded as their craft was 60% submerged when Dun Laoghaire RNLI arrived at the scene.
The Coast Guard issued a statement following rescue saying that the two casualties were “hanging on for their lives”.
“Instructions were given to the casualties on what to do from Dun Laoghaire Coast Guard members until the RNLI arrived.
“Seconds later the RNLI inshore boat arrived and retrieved the two casualties.
“This was a very close call tonight and highlights the incredible decisions made by people who risk their lives by not wearing the appropriate equipment or making sure their craft is seaworthy.
The Dun Laoghaire RNLI confirmed that those rescued were unharmed after the incident.
Speaking on the earlier jet ski incident, the Coast Guard said: “At an earlier incident today, two well-equipped jet skiers had ventured close to shore at Coliemore Harbour.
“Dun Laoghaire Coast Guard members were dispatched, however on this occasion the jet skiers realised their error of judgment and departed.”
The incidents were unrelated. 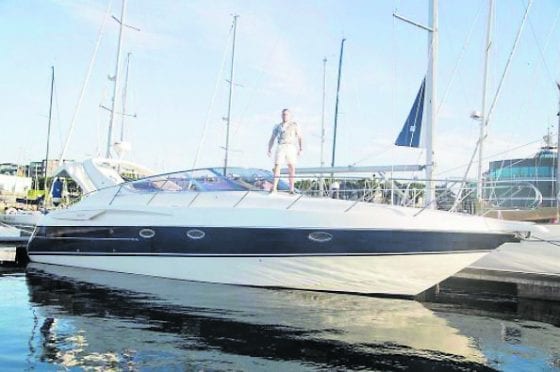 Meanwhile, UFC champion Conor McGregor was spotted taking his new yacht and jet ski out of a spin in Dun Laoghaire Harbour last Friday.
Making the most of the good weather, Conor aka The Notorious, posted a number of photos to his Instagram on board his sleek yacht he named ‘The 188’ a cheeky reference to the weekly dole allowance.

Will it be Simon or Leo? Local representatives pick sides

Stepping out for very good cause

Duo sentenced for “spree of robberies” in...

Mitchell to exit but will not leave...

Overgrown hedging ‘hazardous’ for cyclists who use...

03/10/2019
We use cookies to ensure that we give you the best experience on our website. If you continue to use this site we will assume that you are happy with it.Ok