Calls for CCTV to tackle rise in graffiti

There are calls for CCTV at the pedestrian bridge over the DART line in Blackrock after a surge in graffiti.

Blackrock Tidy Towns spend hours painting the bridge with murals to cover up graffiti, but vandals are destroying it by graffiti on a regular basis.

The group said they are “absolutely devastated.”

“Thoughtless people have totally destroyed the bridge over the DART line. Good money and time was spent on this project to make our seafront attractive and this is the thanks.”

Jim Kenny from community group Blackrock Business Network said the situation is “horrendous” and the graffiti has been happening around the village too.

“It’s just dire. Rockfield Park had a nice sign which is totally graffitied as well.

“I feel so sorry for the people who are cleaning it all the time.”

Mr Kenny’s own shop, Centra in Blackrock village, has also been vandalised by graffiti.

“It’s horrendous when they do it on the front of your shop. It costs [you] a tradesman [to fix it]. I feel embarrassed when [it happens]. It gives the impression that you’re not looking after your shop and it’s dirty.”

Mr Kenny said he would like to see CCTV to combat this problem. 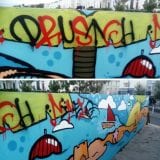 “I think it’s the third time that Tidy Towns have gone ahead to improve and beautify the bridge. There’s a set of individuals or individual who is intent on [vandalising] it.”

Cllr Devlin said he would like to see a CCTV camera put on the bridge.

Dublin Gazette contacted the council and Irish Rail about the problem.

The council said: “We can’t provide comment as this area is the responsibility of Iarnrod Eireann.”

Jane Cregan from Irish Rail said: “We do have a central facility for live CCTV monitoring and we will be looking to expand this in the future.”

When asked if Blackrock DART station will be included in that expansion, Ms Cregan said: “It will be subject to funding allocation, but we hope to include the whole of the DART line.”

Kids set off fireworks near dogs

Anger as Hellfire Club plans get the green...

Vital service for the blind and visually...

13/12/2018
We use cookies to ensure that we give you the best experience on our website. If you continue to use this site we will assume that you are happy with it.Ok