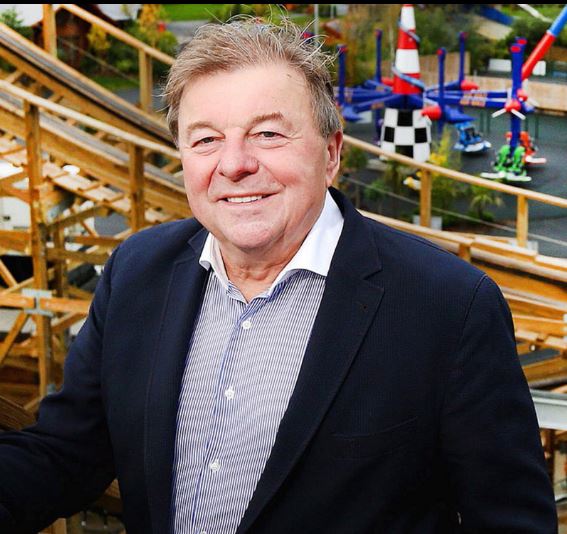 The late Raymond Coyle is mourned by his wife Rosamond and children Natalya and Charles, but to the Irish public, he will be enshrined forever in Irish history as “Mr Tayto”.

Entrepreneur, business man, potato farmer – he wore all those hats and did so with panache. But the man who founded Tayto Park – following one of Ireland’s toughest economic recessions – stated he was a humble potato farmer in the mid 1970’s.

“I wasgrowing potatoes in 1975/’76,” he said in one media interview. “And I made lots of money out of it until, like most farmers, the price crashed.”

Coyle owed the banks 1.4m in 1981 and stated, “I was between a rock and a hard place.” So, he raffled off his farm, the first to do so in the country.

“I sold 4,000 tickets at £300 a ticket, which virtually paid off the banks, and gave me the opportunity to start up in business again, and that’s when I set up Largo Foods.”

The company’s expansion was built on the success of their home-grown brands, along with the clever strategy to buy up the competition.

But it was the design, creation and delivery of Tayto Park that Coyle will be remembered most for.

Looking at the Cadbury Park in Birmingham, Coyle saw a chance to bring a major theme park, a tourist attraction to Kilbrew in Co Meath, while endorsing the company brand.

Next to the manufacturing plant in Ashbourne, Tayto Park entails over 100 attractions including a zoo, educational facilities, and of course, the mega rollercoaster, “the ride of your life” as he jokingly called it during an interview with Ryan Tubridy on the Late Late Show in recent years.

Having sold his remaining shares of Largo Foods to German firm Intersnack in 2007, Coyle stepped down as chairman of the company in 2016. It was announced earlier this year that Tayto Park would be renamed to suit the tourist attraction in 2023.

Tara has long been renowned as the home of Irish Kings; the late Ray Cole will be remembered fondly as the “Irish King of Crisps”.

He died peacefully in the care of staff at the Mater Hospital, surrounded by his family on June 8, 2022, aged 70 years; a private burial was held following a funeral mass at St Andrew’s Church, Curragha last week.

The late Raymond Coyle, may he rest in peace, amen.