A NINE-YEAR-OLD boy who collapsed in a school yard, suffering a cardiac arrest, is now out of hospital and on the mend.

The young lad was saved thanks to the swift actions of hero principal Tim O Tuachaigh, who performed CPR as a defibrillator was rushed to the scene.

The brave pupil spent the last three weeks recuperating in hospital but after having an internal defibrillator fitted he was given the all-clear to go home on Monday.

His classmates at Gaelscoil Ros Eo in Rush are now planning a Halloween party for his return to school in three weeks’ time.

Tim told The Gazette: “We’re hoping he’ll be back in school just in time for all the Halloween nonsense.”

The schoolboy’s stint as a hospital in-patient was brightened thanks to a visit from some of the Dublin team with the Sam Maguire Cup in tow.

Paramedics who rushed to the scene three weeks ago said the swift actions of Mr O Tuachaigh and colleagues were critical in saving the boy.

The defibrillator, also known as an AED, had been supplied by Apache Pizza to St Maurs GAA Club and the school is located on the same grounds. 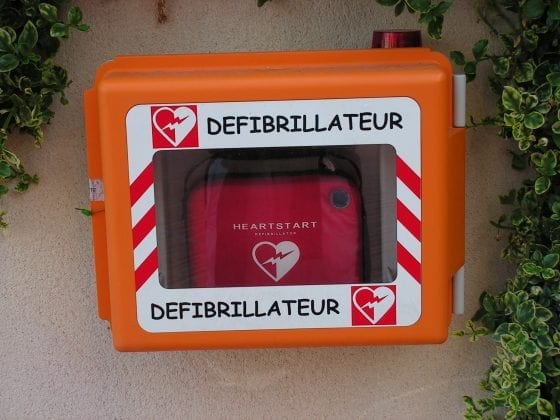 Tim is calling on the Government to provide all schools with a defibrillator. Photo: Wikepedia

Tim revealed: “I did a first aid course more than ten years ago, but I’d never seen a defibrillator before other than hanging on the wall.

“They are fantastic. You open the box and it starts talking to you, with instructions. It tells you what to do, how to do it and when to do it. It’s timed as well, so you just have to listen to the machine.

“I had to act because the choices were ‘The boy is lying on the ground and things are looking grave and you do nothing’, or you help him as best you can.”

Tim is now urging the Government to equip all schools with defibrillators and provide training for teachers.

He said: “It’s a no-brainer. These things save lives.”