‘King/Queen of the Court’ volleyball event hosted at Balbriggan 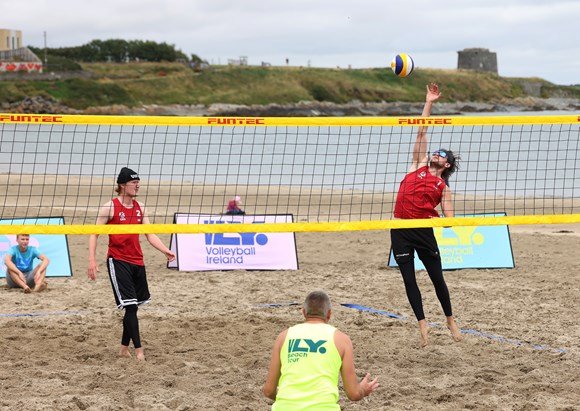 The Volleyball Ireland Beach Tour took to Fingal’s Balbriggan beach last weekend with a King/Queen of the Court event.

The unique format is based on the famous Utrecht Sportworx event which has become a global sensation with international events in Australia, Brazil and the Middle East.  Ireland’s first National Series of King/Queen of the Court was run on a trial basis at Balbriggan and was open to 10 men’s teams and 12 women’s teams.

King/Queen of the Court is played with a total of five teams, 2 two of which will be in the field, the others will be waiting their turn outside the Court. There is a kingside of the court and a challenger’s side.

Robert Burns, Director of Services Fingal County Council commented “The event on Saturday with Volleyball Ireland was a great use of our local amenities while highlighting ongoing effort by Fingal Sports Department and Fingal County Council to support and promote new sports and new sport formats such as beach volleyball to help increase participation in sports and recreation across the county.”

“Our approach is very much to bring the sport to new locations to showcase and promote what is a rapidly growing activity. As well as our competitive tour we have a new Social Volley initiative that supports groups to organise fun sessions and we’re working with councils across the country to install permanent and free-to-use Volleyball posts – we really hope that Balbriggan and Fingal County Council might consider being the latest beach to take up this offer.

“Volleyball Ireland would like to thank the Fingal Sports Office and Fingal County Council for supporting the event.”

Aoife Sheridan, Senior Executive Officer at FCC said “It was great to see Balbriggan Beach host Volleyball Ireland’s first King and Queen of the Court event. Our Balbriggan continues to work on promoting the area and what Balbriggan has to offer and is delighted to support events like this which highlights the fantastic amenity that is Balbriggan Beach.”

If anyone is interested in setting up a Social Volley activity they can contact [email protected] who will be happy to share what supports are available.