Top Posts
Dig Deep, Remain Steady: Mary Lou McDonald speaks...
The Liberties say farewell to comedian Brendan Grace
Some of the world’s biggest acts to hit...
We’re Confused Too: Dublin Gazette dragged into Election...
Win tickets to Coldplay at Croke Park #NOW...
Wines for your wedding – Why It’s Wise...
When Deciding And Doing Goes Hand-In-Hand
Anorexia And Bulimia Not The Only Eating Disorders
Janey Mac, I’m getting married!
Gaels Don’t Want To Create A Storm On...
Aisling wins €15,000 and the chance to have...
Woodbine Park Post Office Closing Its Doors
Strong Opposition To Privatisation Of Leisure Centre
Boden Power through go ahead Senior Hurling Championship...
Peter ‘Franc’ Kelly On What To Do When...
Fingal News

Tributes paid to DFB for quick response to Verdemont blaze

Tributes were paid to Dublin Fire Brigade and the council for their work in helping residents affected by the fire in the Verdemont apartment complex last week.
The fire broke out last Wednesday (May 10) evening, with up to 60 apartments being evacuated.
Investigations into the cause of the fire are ongoing but there has been speculation that it was caused by a lit barbeque falling over in one of the apartments.
DFB sent several units to the scene and eventually brought the fire under control.
Miraculously, no one was injured.
Cllr Tania Doyle attended the scene and later paid tribute saying: “I have recently stood with the firefighters at Coolmine Station, when the potential downgrading of DFB was highlighted in a protest outside the station and if we take one lesson from this unfortunate event this afternoon, it is that with local well-staffed and well equipped stations, major incidents can be turned around, saving lives. 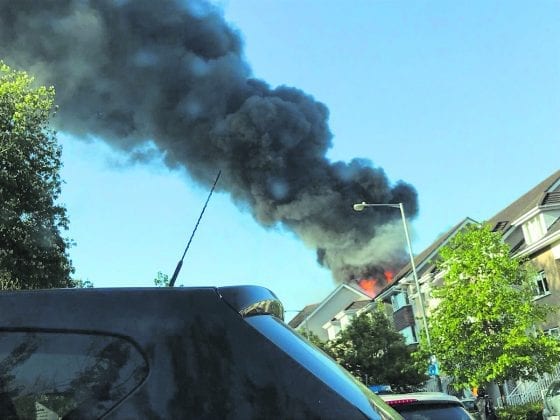 “There are a lot of residents in our community at Verdemont with their families sleeping safe tonight.”
Cllr Lorna Nolan also expressed her gratitude to the DFB and praised the council for their work in housing all of the residents who have been affected.
However, she noted that many tenants who were renting privately in the complex will be left severely out of pocket because they did not have contents insurance.
Cllr Nolan told the Gazette: “If there’s one clear message that I would be sending out, it would be for private renters to inform themselves about private insurance.”
Local TDs also praised the response of DFB and the council.
Deputy Joan Burton said: “My thoughts and sympathies are with the residents of Verdemont Coolmine, Blanchardstown who suffered a disastrous fire at their apartments.
Local TD and Minister for Social Protection Leo Varadkar also paid tribute to the council, DFB and local gardai for their response to the incident.
Minister Varadkar also confirmed that his Department has put emergency supports in place for those affected by the fire.
“I want to assure residents affected that the Department is on hand to discuss how it can best support those affected,” he said.
“The Department’s community welfare service has already held an emergency multi-agency clinic offering advice and support, in tandem with the council and Citizens Information.”

As it happened: 117 minutes that decided LSL Senior Division.

Men had €17,000 confiscated as they prepared to travel one-way to Malaga

FCC So Keen to be Green!