Tiernan, 3, brushes up on his skills with Castleknock Tidy Towns 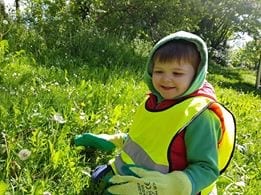 Castleknock Tidy Towns is up and running after a gap of 18 years – with a little help from one of the country’s youngest volunteers.

Meet Tiernan, age three-and-a-half, who is one of the first to muck in for the Saturday morning clean-ups together with his dad Tom and mother Michaela.

Michaela found the newly relaunched group on Facebook and now Tiernan is the first volunteer to don his high-vis jacket and head out the door for the weekend blitz.

Castleknock Tidy Towns chairperson Evelyn Pender says it has “taken off like a rocket” and is now entered for judging in this year’s national competition.

She told Dublin Gazette: “The aim of the group is to tidy and improve the streetscapes of Castleknock village and its approach roads.

“Having an appealing village, with a sense of community spirit, means that people are more likely to shop, eat and spend time locally.”

In March over 40 people attended a meeting in Myo’s pub to resurrect the group and the first monster spring clean on Auburn Avenue in April had more than 60 volunteers.

The group now organises a weekly clean up and in a few short months has collected over 350 bags of rubbish and compostable material which the council removes.

Evelyn revealed: “Volunteers all give their time free of charge to make Castleknock attractive and more user-friendly. We have people of all ages, from all walks of life and backgrounds coming forward to help.

“As well as long-term residents, newly arrived families are taking part and our youngest volunteer is Tiernan, who is just three and a half years old. He is a smashing little fellow and a really hard worker.

“He insists on coming to help and does a serious amount of digging and sweeping up each time. His family are new residents to the area and his mum said she just found the group on Facebook.

“It’s wonderful to think that this newly reformed group could be helping to integrate all residents into Castleknock. Certainly lots of new friendships are being forged.”

The group – instantly recognisable thanks to their high-vis vests and orange wheelbarrows – meet at Myo’s car park each Saturday morning at 10am. They enjoy a cup of tea courtesy of the Silver Spoon restaurant after their morning’s efforts.

Evelyn said their key message is to love your kerb, adding: “If we all did just a little more, we would see big improvements. For example, when people cut their front lawn, perhaps they could cut the strip of grass outside as well.

And if they have elderly neighbours, maybe cut their lawn too.”

Gardai on patrol round-the-clock in Blanch after supermarket shooting

Councillors in a jam over homes proposal for former Chivers site