A brave Swords teenager is set to take part in a head shave for charity in memory of the grandmother she never met.

Aoife Tierney (14) will go under the razor at The Pavilions Shopping Centre today (Thursday, July 12) to raise funds for the Irish Cancer Society.

The head shave is in memory of her grandmother, Kathleen O’Sullivan – affectionately known as Nanny Sully – who died of cancer before she was born.

Aoife’s proud mam, Bridget O’Sullivan, from Rathbeale, told Dublin Gazette: “It started out with her friend asking her to do it with her but then her pal backed out. Aoife decided to go ahead with it anyway.

“She has lovely shoulder-length hair, but when I said, ‘Are you sure?’ she said, ‘Yeah ma, it’s only hair, if I can do something good with it then it’s worth it’.

“What a brave, thoughtful, inspirational, amazing and cool girl!”

Charity begins at home for the family as Aoife’s younger sister Sinead donated her long locks to the Rapunzel Foundation last year. 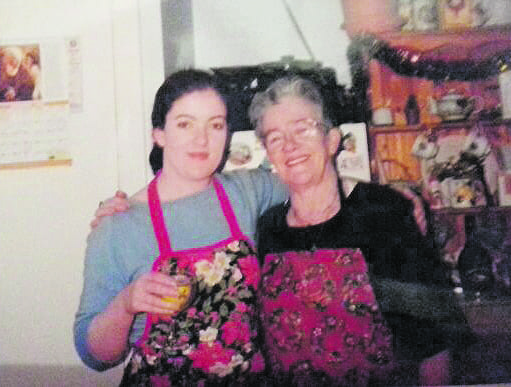 Bridget said her youngest daughter Eimear Daisy (7) has two great role models to look up to, though she’s probably a bit young to start fundraising herself just yet.

Tanya Gallagher from Hairmaster in Swords will do the honours today and Bridget reckons there’ll be “as many O’Sullivans as I can gather” collecting on the day.

Bridget reckons her mother, Kathleen, who died of thyroid cancer in 2000, won’t be far from everyone’s thoughts on the day.

She said: “Ma was as mad as a brush, up for anything and full of skit but also warm, caring and giving.

“Our door at 37 Glasmore Park was always open, with homemade scones or apple tarts, brown bread, porter cake and a cup of tea on offer.

“She did a lot of charity work in her life too, and always volunteered myself and one of my sisters to do collections, door-to-door selling for various charities, church collections, dog sitting, childminding – you name it, we volunteered for it. Whether we wanted to do it or not didn’t come into it!

“Well, it made us who we are, and I’m so grateful to have such a fantastic mother and father, raising 12 of us to be respectful of others, not to take life too seriously, and to always be yourself.”

The head shave gets under way at 4.30pm for anyone who wants to lend support, or you can donate online here.

Bridget concluded: “The girls never met their Nanny Sully, but they’ve heard all about her and know what a character she was. We’re keeping her memory alive.”

Simply Living Yoga in The Park

Dubliners to skydive to raise funds for autism...

Sports Minister Goes Back to School

Let’s Zumba for fun and exercise!

Fingal and DLR Beaches get the go ahead!

Tennis for children and youth in Malahide