Tributes have been paid to teenager Michael Stokes who stole the hearts of the nation when he appeared on RTE’s Room to Improve.

The 15-year-old, known as ‘Kiddo’ to his pals, passed away peacefully on Saturday at Temple Street Children’s Hospital.

According to his death notice, Michael, who was a wheelchair-user, died “following a tragic accident” believed to be a fall.

He earned the title of favourite Room to Improve character for his sassy banter with architect Dermot Bannon – famously telling him to “go back to the drawing board”. 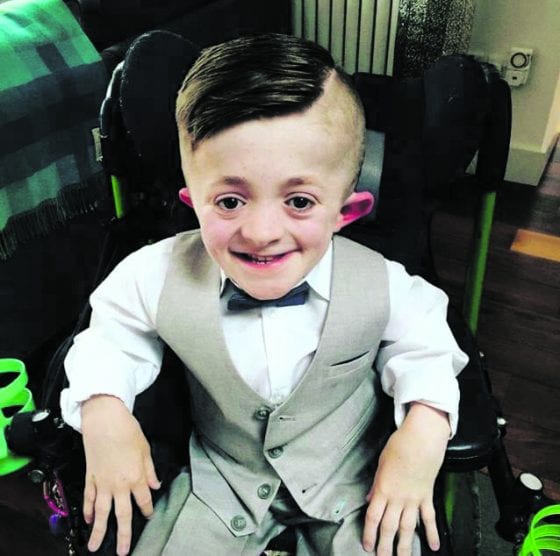 Dermot was tasked with redesigning teacher Ann Higgins and her husband Barry’s Malahide home to make it accessible for Michael during weekend visits.

After the sad news of his death broke, St Michael’s House said: “We are very sad to give Michael Stokes to the angels this weekend.

“He was a treasure to all who knew him. Sincere sympathies to his loving family from our board, staff and all his friends.”

Sean Gilligan Performing Arts said: “Yesterday, we learned the very sad news that our student Michael Stokes had passed away after a tragic accident.

“Michael was a student in our Swords class and prior to that in Artane, so was known and loved by every student, teacher and everyone else who came in contact with him.

“One of the most remarkable things about Michael was his positive attitude to life. He was a ray of sunshine, had a wicked sense of humour and a constant smile on his face.”

Prior to his accident Michael was rehearsing for the group’s upcoming show, Glorious Entertainment, at the Helix theatre later this month.

A spokesperson said: “It will never be the same again backstage without his witty remarks as he waited to take to the stage to sing or take part in a comedy sketch.”

Michael recently moved in permanently with Ann and Barry, and sharing the details on The Late Late Show he said of his specially adapted home: “I love everything; everything’s at my level.”

The teen, who is fondly remembered as “tiny but tough”, was laid to rest in Dardistown Cemetery yesterday after funeral mass at the Church of the Sacred Heart in Seabury, Malahide.

‘Not all children are equal’ says frustrated mum.

Swords is defended as a safe night...

Calls to include Balbriggan in Community Safety...