Revellers using derelict houses in Rush for booze and drugs parties are “having sex in full view of children”, it’s been claimed.

The site of the vacant homes at Palmer Avenue is causing grave concern for locals who say anti-social behaviour is escalating.

Neighbours say the youths who use the houses for loud late-night parties are abusive and intimidating, and some have hurled roof tiles at passers-by.

A petition requesting that the council clean up the sex and drugs den claims the vacant units are “in shameful condition” and pose a serious health and safety risk.

The local authority says it is aware of the situation and hopes to bring the houses back into use. 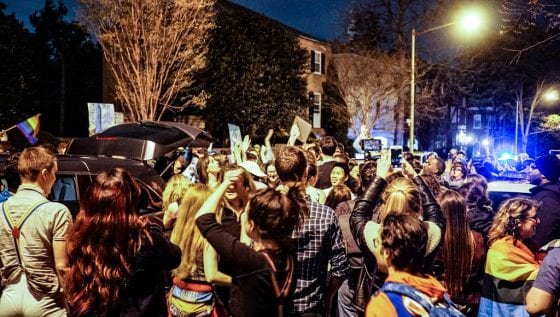 Last week, Deputy Brendan Ryan (Lab) warned that the anti-social behaviour was making neighbours’ lives a misery and called for the units to be used to help tackle the housing crisis.

One woman who signed the online petition said: “It’s beside where I live and I am sick of the anti-social behaviour that goes on til all hours of the morning … Including drug use and sales and people having sex in full view of children.

“It’s also a safety hazard where kids are playing and debris is being thrown and falling from the roof and walls.”

Another concerned mum gave her reasons for signing as: “This site is causing great concern for … those with young children who are exposed to drug, drink and sexual behaviour, not to mention the verbal abuse from those using the derelict house who shout and jeer at children and passersby.

“It is high time that authorities take action before a serious incident occurs.”

According to unconfirmed reports on Facebook, some of the youths causing trouble are believed to be as young as 12, though the late-night revellers are older.

There have also been claims of open drug dealing and violent altercations.
One neighbour who asked not to be named said: “The music is always blaring and they’ve smashed up the place. There’s always broken glass and bottles all over the road after the weekend.”

A spokesperson for FCC said: “Fingal County Council made an application to the Office of Public Works for a Deed of Waiver in relation to these properties at Palmer Road, Rush, in order to acquire them, as the company that owned the properties had been dissolved.

“On foot of this application, FCC was notified this company has been re-established and a Deed of Waiver can not be granted.

“FCC is attempting to engage with the owners of these properties in order to bring them back into use.”

Kilbarrack making up for lost time with success in LSL switch

Thumbs up for Swiftway changes

Call to help dig up the castle’s...

27/08/2015
We use cookies to ensure that we give you the best experience on our website. If you continue to use this site we will assume that you are happy with it.Ok