Singer Rachel Hickey looks set to become the next big talent to come out of Swords as she prepares to release her debut EP.

The 20-year-old English and music graduate took a break from gigging to spend a year in Paris but since returning home she rediscovered her first love.

Rachel, from River Valley, told Dublin Gazette: “I found that I was writing a lot while I was over there and as soon as I got back I started writing again.

“Now I’m back on the gig train and that is going really well. I’m excited about the EP as well and working hard to get the kind of stripped-back acoustic sound I want. 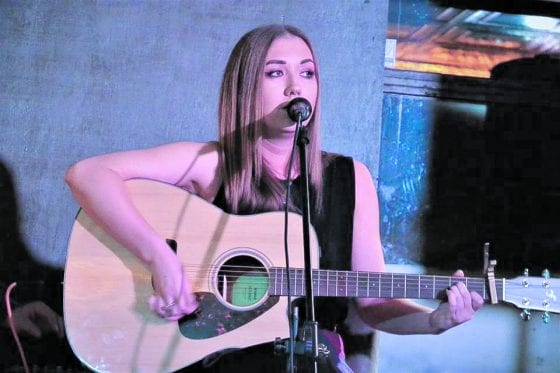 “Swords has a great scene for music, so I have built up a few contacts and a bit of a regular following that way.”

Rachel, who cut her teeth as a teenager performing at the infamous Chandelier sessions in Swords, played a gig at the Wiley Fox earlier this week and will play at the famous Kildare pub in the bog – Roche’s of Donadea – at the weekend.

She works part-time in the bar at the Forty Four on Swords Main Street, which gives her plenty of time to devote to writing, recording and performing at weekends.

The former Loreto College student, whose eclectic set list includes Swedish House Mafia, Coldplay and Lana Del Rey, said: “When people hear a song on the radio they don’t hear the lyrics but when you strip it back they get hooked.

“I’m working from a home studio because I wanted to do this myself, I just want it to sound perfect. I’ve played keyboards since I was seven and taught myself guitar from the age of 12.”

Rachel’s parents, Jackie and Paul, are a great support but she admits: “I drive everyone up the wall because I’m recording away wearing earphones and next of all I get this bang on the wall!”

As for following in the footsteps of Kodaline, who play Malahide Castle in June, she said: “I used to go to see them when they were playing in the community centre around the corner. Fair play to them!”

Man pushed woman in front of traffic in a random attack

Coastal erosion plan must be in Programme for...

08/01/2020
We use cookies to ensure that we give you the best experience on our website. If you continue to use this site we will assume that you are happy with it.Ok