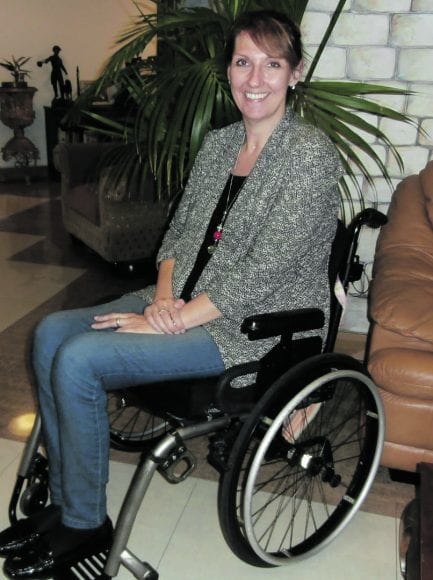 A 45-year-old woman forced to live in a nursing home for more than 10 years says she is cautiously optimistic of getting her own home this year.

Julia Thurmann was left paralysed from the waist down after contracting the rare virus Acute Disseminated Encephalomyelitis, which attacked her brain and spinal cord.

She is now wheelchair-bound and has been living in a nursing home in north Fingal since 2008 but says after more than a decade of being institutionalised there is now a light at the end of the tunnel.

Fingal County Council says a ground-floor home to suit her needs is reserved in a new development being built off the Rathbeale Road in Swords, which is due to come on stream in late 2019 or early 2020.

Julia, who is originally from Berlin and works at the Hertz European Centre in Swords, told Dublin Gazette: “Finally something is happening. But this is after a long time of campaigning, writing emails, all sorts.

“I haven’t been this close [to getting a home] ever. It is very encouraging, but until I have the actual key in my hand…”

Julia said staff at the nursing home near Balbriggan, which has been her home, have been very supportive, but she needs her own space and her independence.

She said: “Downstairs is the Alzheimer’s unit, I am in the acquired brain injury unit. There are young people, but they cannot talk. At this stage, I go around the place like a horse with blinkers. It can be very depressing.”

She added: “In the beginning, I needed a lot more help. It was only one year after my illness and I was coming to terms with being a paraplegic. Now, I don’t need 24-hour care, I’m back at work.

“It has been difficult. When I came here initially, friends and colleagues visited me. One friend said: ‘It’s like visiting you in hospital; we won’t meet you here, we’ll meet you outside – to get you out of this institutionalised environment’.

“I try to get out more for coffee. In January, I spent more than €400 on taxis, but it’s worth paying the money for my sanity.”

She added: “I’d love to plan it all but on the other hand I’m trying to hold myself back, though I am a little bit hopeful now.”

Council does the double at All Ireland Community and Council awards