Drug use in D15 on the increase, study warns

A new report into drug use in Dublin 15 has identified 63 secluded sites that are used for alcohol and drug consumption across the area.
The sites were identified as part of the Drugs and Alcohol Trends Monitoring System, which identified heroin, alcohol and cannabis as the three most common problem drugs.
The report shows images of drug paraphernalia and empty beer cans discarded in secluded public spaces and estates that there has been a 7% increase in those seeking treatment for drug and alcohol misuse. 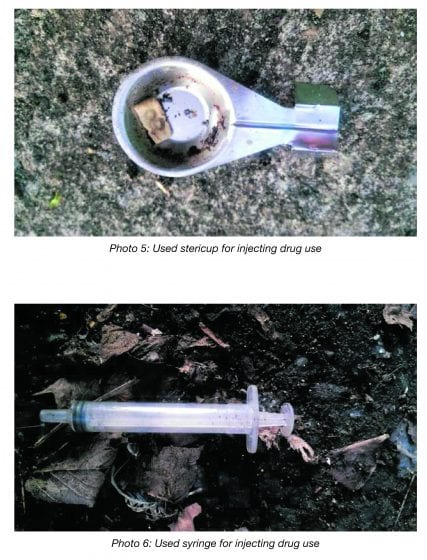 The report was carried out by the Blanchardstown Drug and Alcohol Task Force.
The report found that drug use in the area was on the increase overall, with the number of drug users aged under 18 and over 35 seeking treatment rising since the Task Force’s initial report last year.
While heroin is still the biggest problem drug with 44% of those surveyed seeking treatment for addiction to the drug, its use is decreasing among young people.
Instead, young people are turning to cannabis, alcohol, cocaine and benzodiazepines, with the use of all of these drugs increasing among under 18s.
Some of those surveyed said that they believed that the reduced use of heroin among young people was due to the perception of the drug as being highly addictive compared to other drugs.
One participant said: “A lot of people are…strung out on tablets…and…smoking weed.
“I know a lot of people doing that…and a lot of people would be like ‘he’s not a junkie, he’s not on heroin but he’s whacking tablets out of it.”
Another adult drug user added: “Kids nowadays look on people on crack and heroin as junkies but you have these young ones and they’re smoking weed every day and tablets too and drinking at the weekend.
“They call addicts junkies and I do laugh cos they’ve no awareness about drugs and what they’re doing is the same.”
The easy availability of alcohol and drugs was also identified as a factor in increased use by participants of the study. 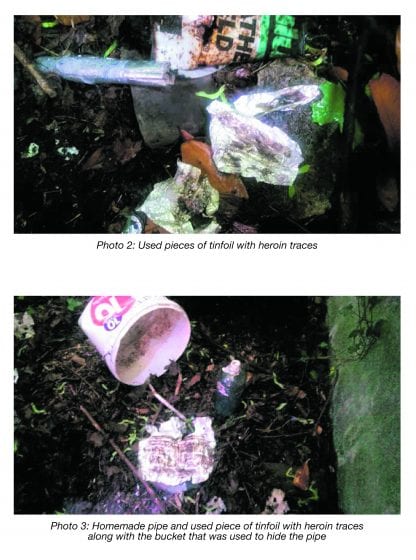 “There’s…people delivering drink right through the weekend, 24/7 you know and they deliver drugs as well…and that’s on Facebook. Well not the drugs bit, they don’t advertise that,” said one participant.
Another participant added: “There’s ‘dial a drink’…€40 a bottle of vodka…at any time.
“If you’re at a party at 4 o’clock in the morning you can call and get booze delivered.
“One fella…he’d do all in one…5 o’clock in the morning drop us up a bag of coke and a bottle of vodka.”
Many participants of the survey felt that alcohol and drug use had become normalised and that this contributed to the problem.
“Young people…don’t even consider cannabis to be a drug…[they] think it’s as normal as having a fag. They don’t see it as a problem,” said one drug treatment service provider.
Alarmingly, one young drug user who was not seeking treatment stated that they felt that young people used drugs such as cocaine because they felt they could not get addicted to them.
“It’s the mentality that everyone’s doing it and you don’t get addicted to cocaine, you get addicted to heroin but not cocaine.”
One adult user who is not currently receiving treatment described how drug use has even become normailised in some workplaces, saying: “Cocaine…it’s almost promoted in these workplaces…where you compete with your co-workers to become the best and everyone in the ofﬁce is doing cocaine including the managers.
“It’s this high-powered sales environment. There’s a guy there whose job it is to take clients from abroad out. He was almost encouraged to supply cocaine…for the customers.”
Inter-generational drug use was also identified as a problem, with the children of those suffering from addiction often falling into addiction themselves.
“I grew into addiction so that’s all I knew,” said one user who is currently seeking treatment.
“Me da had a problem and me family.
“Like my ma had four girls and three of us went on heroin.”
Another user added: “My da’s a chronic alcoholic and he took a nervous breakdown and I just went rampant on the drugs.
“I grew up with domestic violence in my house…it had a really bad effect on me.
“It’s what really got me smoking weed and trying to get away…and the domestic abuse was bad…and that was just the norm.
“So that’s why I think I escaped with the drugs.”
The report also concluded that the lack of access to mental health services for those coping with addiction continues to be an issue.
A lack of awareness about addiction services in the area was also identified as a problem.
Service providers stated that they felt there was a need to inform people living and working in the area about the type of addiction services available in Dublin 15.

Community prays for a little ‘Magic’ for Balbriggan...