A Clonsilla teacher says that having his pupils run a mile a day has proved beneficial to their health and academic performance.
Alan Kenny is a third class teacher in St Mochta’s NS.
He told The Gazette that he was inspired to take up the challenge after reading about a school in Scotland that started a similar initiative.
“It just seemed like a good thing to do and it came on the back of the Sugar Crash programme,” he said.
Sugar Crash – a documentary by Dr Eva Orsmond – aired on RTE in January 2016 and explored what was described as Ireland’s “toxic relationship” with sugar.
After watching the programme, Alan resolved to bring his class out to run a mile every day for the rest of the school year. 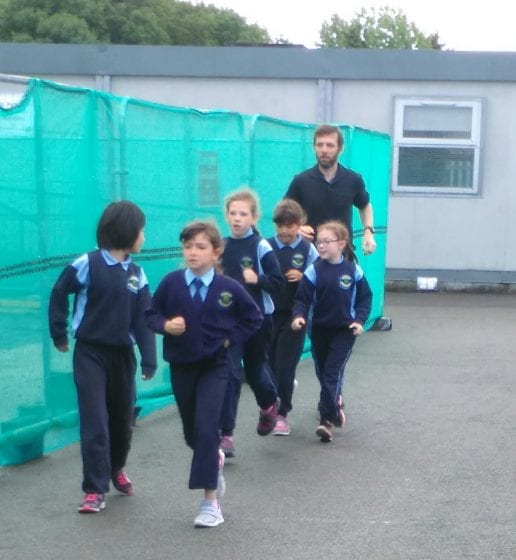 Laps
When he got a new class last September, he continued to bring the class out to run laps around the yard, regardless of the weather.
A report released last year by the Royal College of Physicians said that less than half of primary school children are receiving enough physical activity.
The report – released last October – stated that even mild forms of exercise can help reduce the risk of depression and disease in later life.
Alan said that the 15 minutes of exercise has proven to be enormously beneficial to his class.
“They are all able to run the mile now at this stage whereas at the start of the year you would have had a couple puffing and panting and struggling with it.”
Alan encourages the pupils to complete the mile at their own pace and he says that it has proven to be beneficial to the children’s academic performance as well.
“I think it does benefit them in the classroom as well,” he said.“It gives them a bit of release.”
Alan has begun to take another class out running as well and he said that he hopes that other classes and other schools will follow suit.
He said his class have responded brilliantly to the idea.
“They do really see the value of it and the parents appreciate it as well,” he added.

Wetherspoon’s pub and hotel set to open in 2019