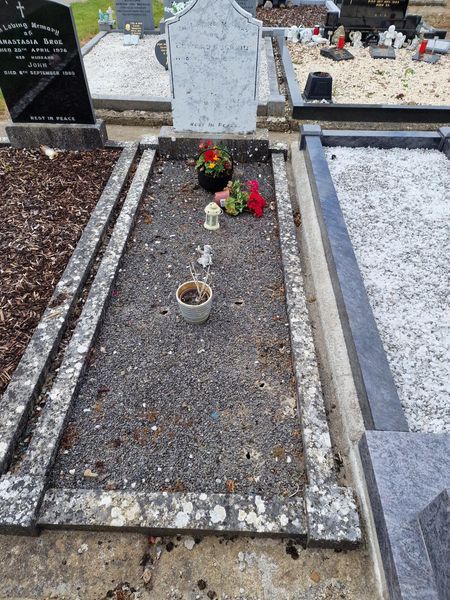 Sometimes people say: “He had big shoes to fill”. In the case of the late Eddie Guerine, he made, shod and repaired so many shoes and boots in the Donabate Portrane area, he is still fondly remembered.

Cllr Adrian Henchy (FF) stated: “I was recently approached and made aware of the significant contribution the late Eddie Guerine made to our local community of Donabate and Portrane, during his lifetime’s work as our local cobbler. “

As such, a group of local people have come together to refurbish the late Eddie’s grave in an effort to commemorate and acknowledge the contribution the shoe maker/cobbler made to his community.

Cllr Henchy noted the work of a cobbler was vitally important for decades especially back in the 1950s, ‘60s and ‘70s when working boots and footwear were made to last, and not just for a season. The repair of long-life leather footwear and school bags was in demand back then.

“The late Eddie would practically have reached into every home on the peninsula throughout his lifetime be it preserving and restoring shoes or repairing leather school bags. Back then families would pass them down through the family and even to the next generation.

“Eddie lived and worked from his modest home on the Portrane Road. He was a highly respected and very much appreciated man among the local community where his love of Italian football gave him a further exotic appeal in the 1950s. He led a very simple life, worked hard during the week and enjoyed a few pints with the locals in Keelings at the weekends.”

Eddie passed away in October 1978 and was laid to rest in the local Donabate Cemetery. His modest grave has since fallen into disrepair so hence, a group of local residents want to acknowledge his work within the community.

“This heartfelt tribute to the late Eddie in restoring his grave is led by Ultan (Herb) Reilly and a local group of individuals/families from Phoebe Reilly, Paul Ryan, Garret Bates, Brian Carton, Jim Denneny and Pascal Henchy,” said Cllr Henchy.

“This will see Eddie’s final resting place restored, and thereby endorse his memory and lifetime work to the people of Donabate/Portrane.”

If anyone would like to make a contribution to the restoration of the grave, please feel free to email Ultan at [email protected] or contact any of the above local residents who are supporting Ultan with this initiative.