Families have been left devastated after mindless thugs smashed up their loved ones’ headstones by driving a car through a Skerries graveyard.

The joyriding vandals have been branded “sewer rats” after they targeted plots – including the final resting place of two former gardai – at Ardla Cemetery.

The graves of Superintendent Denis Hogan, who died in 1984, and John Joseph Thornton, who passed away in the mid-80s, were both badly damaged. 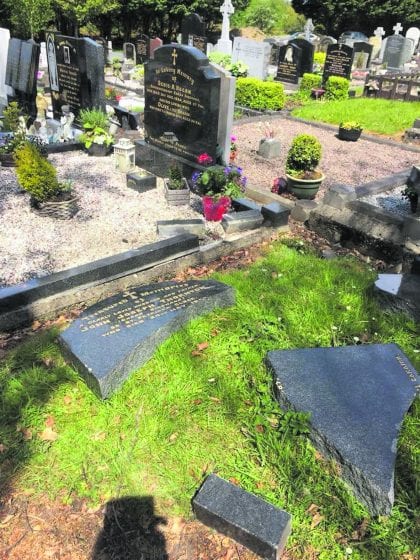 A photo by Lannon’s Funeral Directors highlights part of the joyriders’ damage.

A battered car was later found abandoned near the grounds and is being examined by gardai in the hope it might lead them to the culprits.

Supt Hogan’s wife, Olivia, who died two years ago, is buried in the same plot as her husband and their son, Damien, is a serving Garda sergeant.

He said: “This is a despicable thing to do in sacred ground and extremely distressing for the families involved.

“The two graves are beside each other. The plinth on my own parents’ plot has been badly dam-aged, but the damage to the second grave is shocking.

“It is awful to see it. We really can’t understand why anyone would do something like this. The people left hurting are the families of the deceased who are still mourning.

“This vandalism shows a total lack of respect for the dead and the living. The people who did this need to be held accountable and I would urge anyone who knows anything to contact the Gardai, in confidence.”

The cemetery is used as a den for drinking and anti-social behaviour but the latest act of vandalism has shocked and outraged local residents.

Lannon’s Funeral Directors were first to post photos of the damage on social media and said they had had offers from friends in the trade to replace the headstones at a discount.

Almost 100 people commented on the post, with one branding the culprits “sewer rats” and another calling for better security and management at the graveyard.

08/02/2018
We use cookies to ensure that we give you the best experience on our website. If you continue to use this site we will assume that you are happy with it.Ok