All-weather pitch gets the go-ahead

An all-weather pitch in River Valley got the go-ahead at a full meeting of Fingal County Council last week after a lengthy debate over parking.

Cllr Joe Newman (Ind) asked officials to reassess the provision of 103 car parking spaces and five coach bays but the proposal was passed without amendment.

Afterwards, he told Dublin Gazette: “I’m delighted that the all-weather pitch got the go-ahead. I have worked hard to achieve this objective over the past four years.

“While I was unsuccessful in getting the council to review the ill-thought-out car park as requested by residents we will move on and accept the democratic process, flawed as it is. 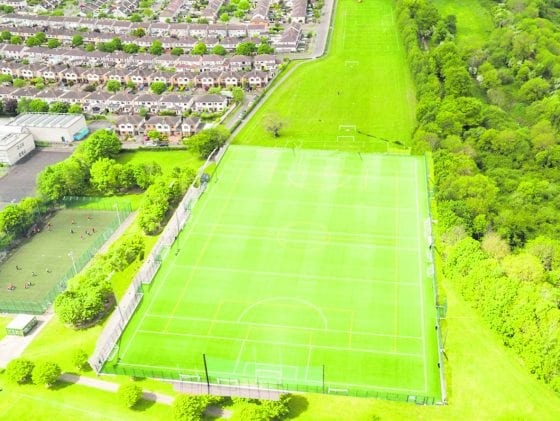 “I can only hope the car park will alleviate the parking issue in River Valley. Time will tell. Next issue on the agenda is to secure some changing facilities and campaign to get toilet facilities for park users.

“It’s a crying shame to lose such a valuable high-amenity community open space for a car park … That’s progress, I guess.”

At last week’s council meeting members heard that 26 submissions were received on the floodlit pitch project – including one from St Finian’s GAA Club, River Valley Rangers FC, and a petition with 350 signatures.

They warned the extra parking spaces would promote driving, exacerbate traffic and provide a gathering place for anti-social behaviour.

But planners argued it would increase safety as coaches are currently forced to park along the grass verge opposite the park on a bend in the road.

The council also ruled that while the car park replaces green space it will not interfere with “the principal use of the area as a recreational hub and wider parkland area and would not result in a shortage of recreational space”.

Coastal erosion plan must be in Programme for...

02/08/2018
We use cookies to ensure that we give you the best experience on our website. If you continue to use this site we will assume that you are happy with it.Ok