‘Get on with regulating Dublin city’s rickshaws’

The Minister for Transport, Shane Ross, has been criticised over the lack of regulation on rickshaws in the city, eight months after a National Transport Authority (NTA) report on the tricycle-taxis.

A public consultation process was held by the NTA seeking to establish new laws for the regulation of rickshaw operation in the city centre.

The consultation process ended last September, with a report submitted to the transport department.

There has since been little movement regarding the introduction of legislation, with Fianna Fail TD John Curran calling on Minister Ross to put forward proposals to regulate rickshaws. 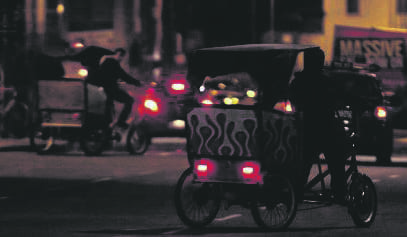 Hundreds of rickshaws operate within the city each weekend, bringing revellers to and from different locations within town.

There is no certainty of whether the bike-cabs are insured – as the drivers of rickshaws are not under regulation, they are not required to have insurance to operate a rickshaw.

At present, gardai can only treat the operators of rickshaws as they would treat any other cyclist. Last year, Dublin City Council tried to implement bye-laws, but was told it did not have the power to legislate.

Deputy Curran said: “Regulatory policy must be developed with the NTA around rickshaw licensing, insurance, user safety and other matters.

“Under current legislation, small public service vehicles are defined as either being pedal-powered or mechanically-propelled. However, this does not cover rickshaws, as they are often battery-powered.

“In the same way that motorists, taxi drivers and public transport operators are standardised, we must legislate to help protect the public when using rickshaws.

“I am calling on Minister Ross to get on with the necessary legislation.”
When contacted by Dublin Gazette, Minister Ross said he is “actively working” to address concerns on the use of rickshaws and will hold a meeting for those concerned with the safety of rickshaw use at the end of this month.

He said: “I am actively working to address public concerns about the use of rickshaws. This issue has been raised with me both as a minister and local TD.
“Last Autumn, I asked the NTA to conduct a public consultation on the matter and I am currently analysing the results.

“I am also holding a public meeting for those who have concerns about the public safety of rickshaw use, which will be held in The Coach House, Ballinteer on May 28 at 8pm,” he said.

Loss of letter to gardai ‘the final insult’ for Darren