Residents at a council flat complex in Kilmore, Coolock have taken the decision to move out of their homes, claiming they’re “a death trap”.

They said they do not feel safe in their homes, as large cracks have appeared in the stairwell of their block and the concrete stairwell has begun to move.

Dublin City Council (DCC) put up supports at the bottom of the stairwell in Block 8 of the Cromcastle Court flats after receiving a photograph of cracks in the ceiling from a resident, and group spokesperson, Amy Lindon.

Residents who spoke to Dublin Gazette all said that they are terrified of going back into the flats. 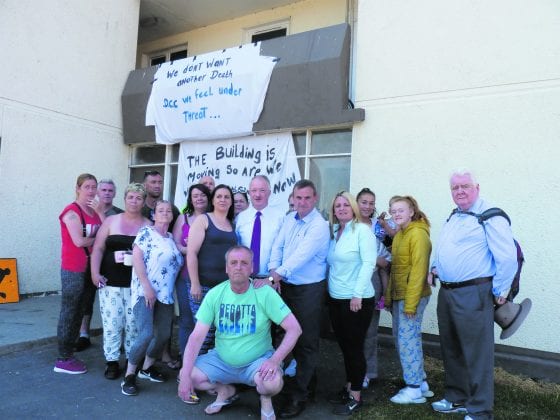 Amy said: “There are cracks in all of the flats, not just here at Number 8. When I took the photograph and showed it to the council, they got a shock and had to move quickly.”

“We got an independent consultant engineer out here last Friday and he suggested we prop the staircase, and it’s fully safe.

“We have another engineering firm that are going to provide us with a report … and we will get the materials needed to complete the job.”

However, this was not acceptable to the angry residents, who demanded nothing short of proper housing, as they had no faith in the words of the council officials.

One said: “None of us want to live in a building site, and it’s getting worse. You need to come into our homes and see the cracks in the walls – it’s terrifying. We want out of here.”

The under-fire council officials vowed to return to the residents within three weeks with a definite plan of action.

Deputy Haughey said: “The residents have been very badly treated and they are genuinely concerned. It’s very important to get the report from the structural engineer as soon as possible and a programme of works be put in place immediately.”

Amy told Dublin Gazette said: “I really feel this is a death trap and we feel unsafe going back in.

“We want the whole building checked out – not just the stairs. We intend to stay here outside, come rain or shine, until the 100% guarantee is provided to us,” she said.

Ellie’s Xmas Appeal for Crumlin to set out...

Krispy Kreme to open their first store in...

Drug addicts shoot up in front of...

28/02/2019
We use cookies to ensure that we give you the best experience on our website. If you continue to use this site we will assume that you are happy with it.Ok