A Dublin woman, whose son underwent life-saving surgery at six days old, has put together support kits for other mums caring for their sick babies in hospital.

Jan Martin set up PumpPal following her own experience learning how to express breast milk for her son, Caleb.

In December 2006, at just two days old, he was transferred from the Rotunda Hospital to Crumlin after doctors discovered he had three heart defects.

Jan told Dublin Gazette: “Everything was normal, all the tests were fine until the day we were due to go home and they did the discharge tests. The paediatrician realised something was wrong and took him down for a scan.

“Later he said ‘Thank God’, because Caleb wouldn’t have survived beyond two weeks – he would have collapsed at home, or it would have been a cot death.”

Caleb was operated on at six days old and surgeons removed a narrow tract of his aorta.

Jan said: “It was horrific; it’s so hard to describe to people, it was like a nightmare come true. You didn’t think it was real, especially because it was such a shock.

“I breastfed my first son and I knew I wanted to breastfeed Caleb. But when I heard he needed surgery I thought it was out, I didn’t think it was possible.”

Jan, who is from Malahide and now lives in Portmarnock, knew little of breast pumps but posters in the hospital recounting other women’s experiences helped change her mind, and staff showed her how to express milk.

She said: “I felt I could do something for him. When your baby is put into an incubator like that, mum and dad are completely useless.

“We could barely touch him, never mind keep him safe and warm.

“You feel in the way because the staff are doing everything, you can’t even change his nappy. After expressing, I thought, ‘Well, if he gets through surgery, I’m going to have all this milk’, and I knew it would help him fight infection.” 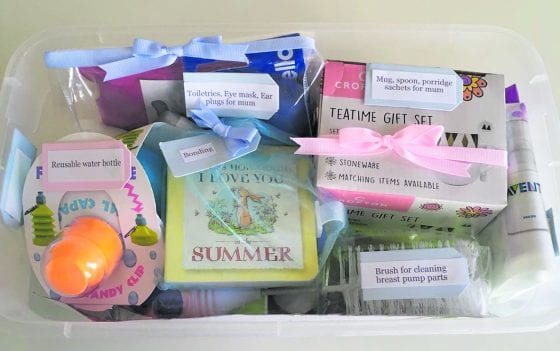 One of the PumpPal kits.

Caleb left the hospital six days after surgery and now, at 19 months, Jan describes him as “a regular toddler”. She added: “He’s doing great. He’s a messer, he wrecks everything. He’s walking and trying to talk.”

Jan resolved to try and help others in the same situation and last month supplied 100 PumpPal kits to Our Lady’s Hospital for Sick Children on a pilot basis. She hopes to continue fundraising and supply 100 more.

There are also a series of hand-written notes reminding the new mum to try and rest and to remember to eat. One businesswoman, whose own child underwent heart surgery, sent Jan 100 lip balms and 100 moisturisers.

Jan said: “You have parents travelling up in an ambulance with their baby from Kerry or Cork for an emergency admission and they’ve nothing with them. I’ve been getting emails from mums who were given a kit, telling me what a difference it’s made.”

She said: “If you had told me a year ago that I would now enter a children’s hospital voluntarily, I would not have believed you. But the long corridors of Crumlin look different to me now.

24/10/2019
We use cookies to ensure that we give you the best experience on our website. If you continue to use this site we will assume that you are happy with it.Ok