There are a record number of people travelling to the city centre using public transport, new figures by Dublin City Council and the National Transport Authority (NTA) have revealed.

The figures are included in the Canal Cordon Report, 2017, which was conducted over a number of days last November.

More than 107,000 people came into the city centre using the Luas, bus or Dart – the largest number recorded since the Cordon Report began in 1980.
This means that more than half of all journeys into the city each morning are made on public transport. 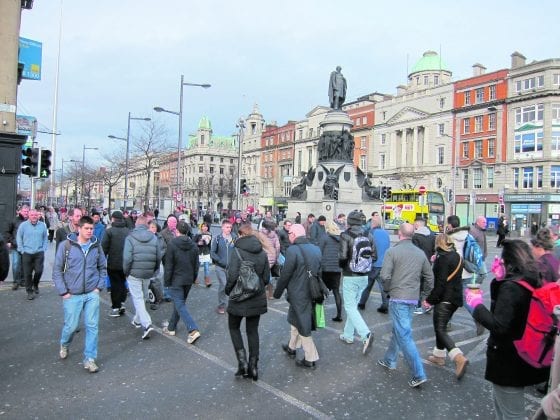 The report also revealed that more than 12,000 people cycle into the city centre on their daily commute – the highest number on record.

People are also walking into the city daily, with 25,000 pedestrians crossing the ‘canal cordon’ during the field study.

On average, 70% of all trips into Dublin city were made by a sustainable mode of transport, which includes cycling, walking, taxis and other forms of public transport.

This has grown year on year since 2010 – in the past 11 years, the share for sustainable modes have grown by 9%.

Anne Graham, chief executive of the NTA, said: “These figures are very encouraging and are a tribute to all of the operators providing transport into the city who have managed, not just to retain passengers, but to actually grow their customer base.

“What we see here is a clear indication that people in Dublin are responding positively to the services that transport operators are providing every day.

“Public transport reduces the amount of greenhouse gases and other emissions that are being generated, so it is better for the environment and helps us to meet our national greenhouse gas reduction targets.”

Did you Rush to guess beach in ITV show?

Fury over plans to move halting site to Fingal/Meath border