Residents and workers in the city centre have voiced their disapproval at a lack of communication regarding the city’s upheaval for the Pope’s visit this weekend.

Pope Francis is visiting Dublin as part of the World Meeting of Families, with thousands set to descend upon the city as he partakes in events in Croke Park and Phoenix Park. The Pope’s visit was initially announced in March of this year.

However, locals have complained that the event is akin to a ‘hurricane’, with people either needing to remain in their homes or completely leave the capital altogether this weekend due to strict road closures and police cordons around Dublin making it near impossible to get around.

A resident living just around the corner from Croke Park, who wished to remain anonymous, told Dublin Gazette that they hadn’t received any official information on road closures or impact on the area as close to this weekend’s event as Wednesday morning, despite the event happening this coming Saturday.

The Croke Park resident said: “I know the information is available online if you want to look for it, but there’s older people living in the area who won’t have access to that. Nothing has come through the door with any information on what’s going to happen around here with security, Garda cordons or road closures.

“All I know is, from what I’ve seen so far, that it seems like I’ll essentially be stuck inside my house all weekend until the Pope is gone.”

Jess lives near Phoenix Park, and said she’s getting out of the city this weekend due to the Pope’s visit because of the vast amount of disruption.

“I’m leaving Dublin for the weekend of the Pope’s visit because every road near me will be closed and I won’t be able to get in or out, and I don’t fancy a bout of cabin fever. I don’t know if it’ll be feasible to easily get back to my apartment on Sunday night for work on Monday,” she said.

Those who work in the city centre are also hugely affected due to road closures and public transport diversions.

Albert, who works a store in Jervis Street Shopping Centre, said that he still doesn’t know if he’ll be able to work his shift this weekend as Henry Street will be closed.

“None of the buses from my local area, Finglas, are going anywhere near town on the Saturday because of the diversions and road closures, so I don’t know how I’ll get to work. 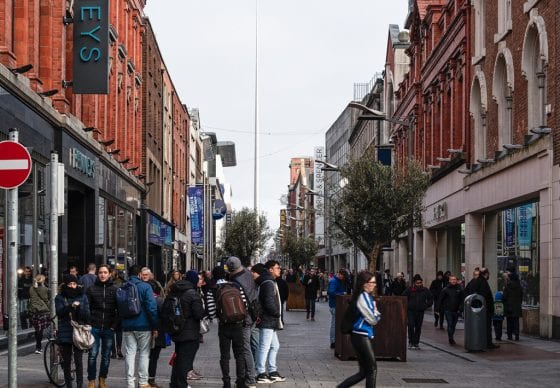 “I work on Henry Street, but it’ll be closed for half the day to the public. I still don’t know if my shop [where I work] is going to be open, and I don’t know when I’ll know. Apparently, the shopping centre plans to be fully open but I don’t see how that will work if Henry street is closed for 5 or 6 hours,” he told Dublin Gazette.

Graeme McQueen from Dublin Chamber said that there is ‘a lot of confusion’ about the arrangement in the city centre this weekend, and that ‘communication has been poor’.

McQueen said: “There’s a lot of confusion out there about what’s going to happen this weekend. A lot of businesses in the city are unsure what to expect. Many fear that the city centre is going to be extremely quiet. Retailers and restaurateurs are unsure whether customers are able to reach them, and there’s also uncertainty as to whether staff will be able to make it to or from work. Communication has been poor overall.

“It was known a long time ago that the Pope’s visit is happening, but just a few days before the event there is a huge amount of confusion around what will and won’t be possible this weekend. There was very little consultation with the business community in the lead up to the event.”

A response from the OPW, who are managing the event, was not received by the time of going to press.

Balbriggan Beauty expert bags a €100,000 prize at The Pitch

Ironman tests the will of the masses

18/10/2018
We use cookies to ensure that we give you the best experience on our website. If you continue to use this site we will assume that you are happy with it.Ok