There has been outrage from cyclists after funding for a public consultation on the Kimmage to Donnybrook cycling ‘quietway’ was voted against in a council meeting on Tuesday.

The proposed ‘neighbourhood greenway’, also known as a quietway, would have potentially created a cycling and walking route from Kimmage to Donnybrook, and would have also linked in Terenure, Rathmines and the northern edge of Milltown.

It would have prioritised cyclists and pedestrians, aiming to eliminate a ‘rat run’ on the quietway by having alternating one-way streets, or parts with no entry. Initial plans for the quietway emerged in 2016. 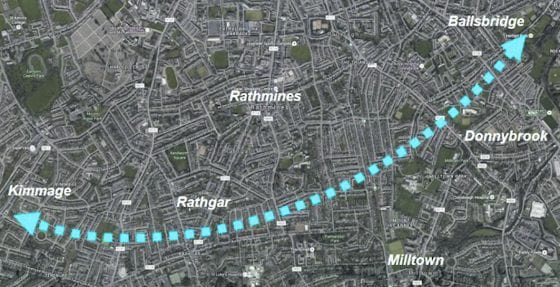 The proposal was initially put forward by Fine Gael councillor Paddy Smyth, who said he is ‘disappointed’ that other councillors voted against public consultation on the project.

“To say that eight of my fellow councillors saw fit to vote down a proposition to engage in public consultation with their own constituents on how best to provide safe, quiet, child friendly route across the city could be delivered has left me profoundly disappointed not to mention completely baffled,” Smyth told Dublin Gazette.

The lack of public consultation is something that Smyth said had been the main criticism of the project thus far.

“To add insult to injury, the main criticism of the project to date, from both residents and the councillors who voted it down, has being lack of public consultation.

“The spurious reasons proffered by the councillors in question, which included insisting that lack of exercise has no link whatsoever with childhood obesity, would be funny if the consequences we not so tragic,” Smyth said.

Many disgruntled cyclists and pedestrians took to Twitter to criticise councillors who voted down the opportunity for a public consultation.

Dublin South East councillors Ruairi McGinley and Dermot Lacey both took to social media to say that the plans for the Quietway were ‘divisive’ and ‘incomplete’, with McGinley saying that a public consultation would have been ‘ill conceived.’

Cllr Lacey told Dublin Gazette that some of the comments he received from people on Twitter were unfair, and that he didn’t vote no to the proposal without reason.

“We were given very little information on it, and the agenda didn’t even say there would be a vote, it said there was a presentation on the greenway.

Mannix Flynn and myself asked if the vote could be postponed to a later time so we could get more information on the proposed plan, but we were pushed for an answer there and then,” Lacey said.

Lacey continued: “My issue was with one particular road on the plans that I questioned, and I couldn’t get an answer on it.

“Even if we can’t agree 100% on what we would want, I’m more than willing to negotiate to see if we can come up with something. I’m an advocate for cycling, and I’m working on a similar project with the council for the Dodder.”