A community is calling for Dublin City Council to provide them with a solution to major traffic flow problems in the area.

Residents of Newtown Court in Clarehall have launched a petition asking for alternative road access to be constructed, due to obstructions on Newtown Way and Belcamp Lane which have become a danger to locals.

There is currently an empty building site at the entrance to the estate, which residents suggest is a major cause behind the current state of the entrance.

Larry O’Toole, a local Sinn Fein councillor, told Dublin Gazette that he has been in communication with both local residents and Dublin City Council.

“After meeting with the residents, I advised them to create a petition. When we have enough signatures, I’ll then present it to the council.

“At first the council seemed negative regarding the issues, but lately there has been some more positivity,” O’Toole said. 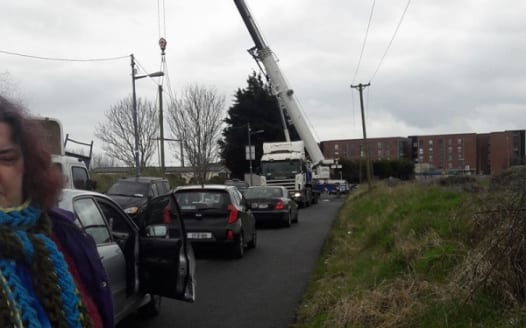 Residents are asking for access to the N32 from the estate, which would create a crossroad junction. O’Toole says this would be safer for residents than the current route of the estate.

“There is already a pedestrian entrance, but to have a road to the N32 from the estate would make things safer for residents given the current condition of the existing entrance,” he said.

The community have said that the entrance to the estate has become like ‘a dumping ground’, which has begun to be come frequented by stray dogs as a result.

One local resident, Stephanie, has said she is ashamed to have visitors come to her home because of the high level of rubbish.

“The drive into our estate past the sites is a disgrace. The road is full of smashed glass from the cars and the rubbish is disgusting,” she said.

Residents have also alleged that the entrance is ‘frequently blocked’ by ‘illegal’ traveller settlements at the entrance of the estate. A request for comment from the Irish Travellers Movement had not been answered by time of going to print.

“No one could get in or out on Easter Sunday morning while a mobile home was being placed.

“What if emergency services were needed, someone’s life could have been in danger,” said local Linda Brady.

O’Toole told Dublin Gazette that the traveller camp has been there for years, but no further comment could be made as there are currently legal proceedings surrounding the settlement.

‘I fear there’re going to be more deaths...

Liberties flea market has to hop from...

20/12/2019
We use cookies to ensure that we give you the best experience on our website. If you continue to use this site we will assume that you are happy with it.Ok