Naomh Fionnbarra GAA Club will finally see their pitch completed, months after protests outside Dail Eireann calling on the Government to finish the project after the company behind the development went bust.

Naomh Fionnbarra in Cabra were initially promised a new pitch in exchange for a large portion of their land in 2015, so a new school could be built for the locality by the Department of Education. 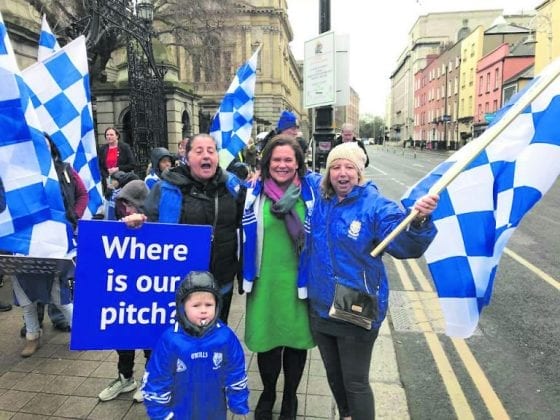 Naomh Fionnbarra with Mary Lou McDonald at one of their numerous protests.

The school opened last year, with building on the new pitch speeding along until just after last Christmas, when all production ceased.

It is believed that the sub-contractors hired by the Department of Education to build the pitch, Carillion, collapsed earlier this year.

As previously reported in Dublin Gazette, the pitch had about a week’s work left before it reached full completion, but the site was left sitting idle despite the club protesting to the Department of Education a handful of times and sending letters to Education Minister Richard Bruton calling for a development.

The leader of Sinn Fein, Mary Lou McDonald, slammed the slow response from the Department, and its lack of communication with the GAA club over when they might be able to play on their home turf once again.

Deputy McDonald raised the issue in the Dail, saying she had “no other option” but to take the issue to the Taoiseach as she hasn’t received sufficient response from Minister Bruton. 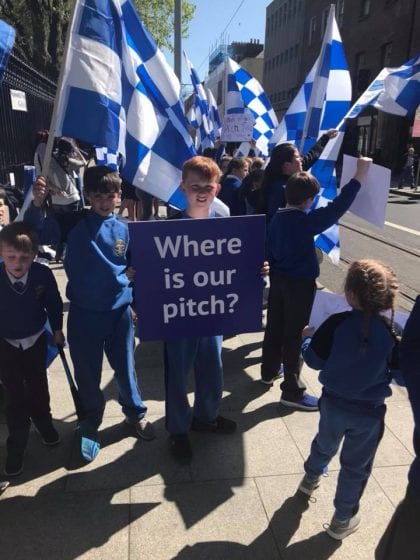 Naomh Fionnbarra will see work on their pitch resume before the end of summer.

The Department of Education previously detailed that the value of the works that remain is estimated at €117,751.55.

In a statement to Dublin Gazette, a spokesperson from the Department said that it is “committed to completing the works as soon as possible”, with work on the pitch expected to resume in August.

The statement continued: “The Department has terminated the contract with [Carillion] under Clause 12 of the Public Works Contract.

“The design team is currently finalising a detailed scope of works which are outstanding, and the Bondsman will be requested to have the works completed without the need for a public tender process.

“The Department is committed to getting all of the outstanding works completed as soon as possible.”

Deputy McDonald told Dublin Gazette: “I understand that the outstanding work on the club’s pitch is due to begin at the end of August. It is welcome that a date for the works has finally been offered up by the Department.

“I want to commend the club and its members for their vigorous campaign to secure a date for completion of the work.”

Freya’s Fairies need your help to adapt her...

Just the jab in Raheny as vaccines roll...

Grangegorman permeability scheme to be made permanent

Glasnevin schoolhouse could yet be saved from...

Will you help to turn Darkness Into...

19/04/2018
We use cookies to ensure that we give you the best experience on our website. If you continue to use this site we will assume that you are happy with it.Ok