Countess Markievicz is honoured with a plaque at Rathmines home 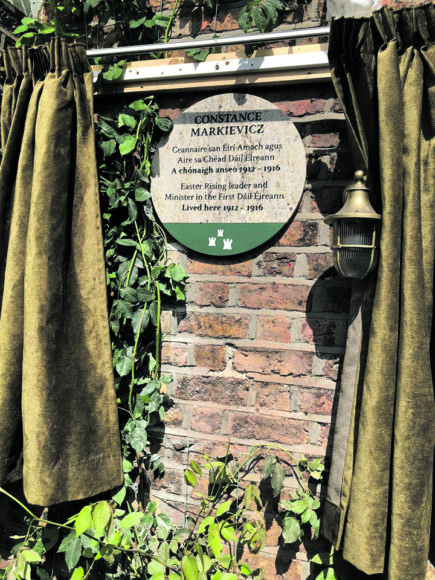 One of Ireland’s most famous female figures was honoured with a plaque erected at her former home in Rathmines on Monday.

Countess Constance Markievicz, who fought in the 1916 Rising and was the first woman elected to Parliament in 1918, had a Dublin City Council Commemorative Plaque established at her former home in Rathmines.

The scheme commemorates people, organisations and events that have made a unique and significant contribution to the history of Dublin.

Thanks to Lisa and James for opening their home in Rathmines for the unveiling of a plaque on their house to honour Countess Markievicz who lived there between 1912-1916. pic.twitter.com/H7wg992X6L

Speaking about the event, Lord Mayor Paul McAuliffe said: “It is fitting that Countess Markievicz should be remembered here at Surrey House which was her home during some of the most troubled years of this country’s history.

“During that time, she was actively involved in the Women’s Movement, but also in the political and military movements that were gaining momentum in the lead up to the Easter Rising.

“She was truly a leader in both her political and military life and it is important that this commemorative plaque should be placed here in her memory.”

Born into the wealthy Gore-Booth landlord family of Lissadell, County Sligo, Constance Markievicz turned away from her privileged background and devoted herself to the struggle for Irish freedom, women’s suffrage, and social justice.

Surrey House was her home during the crucial period of 1912-1916. It was raided and wrecked by British troops during the Rising.

A ‘Na Fianna Eireann’ banner, seized by the British authorities from the house in 1916, is currently on display in City Hall, on loan from the British Royal Collections.

Countess Markievicz didn’t live in Surrey House following the Rising, spending the remainder of her life living with friends until her death in 1927.