There has been outrage at the revelation that permission has been granted for a large housing development on the playing fields of St Anne’s Park.

Despite Dublin City Council’s recommendations against the planned proposal and numerous protests from residents, An Bord Pleanala (ABP) have granted permission for 104 houses and more than 430 apartments to be built on the park’s pitches.

The permission given for the development by Crekav Trading, part of developer Marlet, is subject to 24 conditions.

The conditions include detailing the opening hours of the access points between the site and St Anne’s Park, and the payment of a €100,000 ‘security bond’ to the planning authority ahead of development to ensure the protection and preservation of trees on the site and in St Anne’s Park.

There is also additional uproar as planning permission by St Paul’s College for two all-weather pitches to replace those being lost by the development was denied by APB as the new pitches were said to potentially have a “significant impact” on Brent geese living in the area.

Local GAA club, Clontarf GAA, said they are disappointed in the decision made by the council.

A spokesperson told Dublin Gazette: “Clontarf GAA Club lodged a detailed letter of observation with ABP setting out the reasons why planning permission should not be granted and the impact such a decision would have on the club, especially its juvenile members.

“It was a big disappointment to the club that ABP granted full planning permission to the proposed housing development adjoining St Paul’s College.” 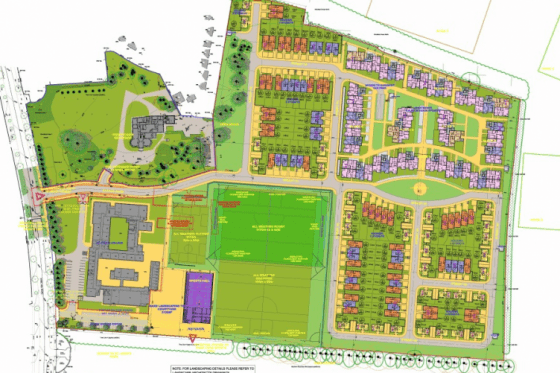 The I Love St Anne’s group issued a statement to Dublin Gazette expressing disappointment at the decision, saying they were “shocked and confused” at the permission granted.

A group spokesperson told Dublin Gazette: “1,100 objections were lodged to this plan and 10,000 signatures were gathered on an opposing petition.

“Serious concerns were raised by Bird Watch Ireland, An Taisce and the Department of Culture, Heritage & Gaelteacht, none of which have been fully addressed by ABP.

“All 15 North Central area councillors, across all parties, submitted objections.

“Given all the above, you can understand our shock and confusion as to how APB has come to grant this permission.

“Aside from ignoring public concerns, they have effectively rezoned a piece of institutional land to a piece of residential land, without the inconvenience of any public consultation process, increasing its standing value by many multiples overnight.”

The college are expected to appeal the rejection, with local GAA club Clontarf GAA saying they have been “left in the lurch” with news that the existing pitches will be developed upon but will not be replaced.