More than 15 people were queuing to see a single room for rent in Rathmines last week, as Dublin’s housing crisis progressively worsens.

In images sent to Dublin Gazette, a large number of people could be seen queuing to see the property at Lower Rathmines Road.

The viewing was for a ‘studio’ apartment – however, the images show that it is a small front room with a double bed, traditional fireplace, kitchen area and a ‘miniature shower room’, advertised as 20sq m.

The images show a restricted amount of room for movement in the available space, something that isn’t dissimilar to many other properties appearing for rent on sites such as Daft.ie and Rent.ie.

The bed and kitchen share the same space, as well as the living area. According to the Oxford Dictionary, this is the definition of a bedsit – outlawed in Ireland since 2013.

The rent for this room was being charged at approximately €1,350 per month, but has now been removed from the rental site.

Vincent (name changed to protect his identity), who took the pictures, said: “This ‘flat’ was to rent from a well-known Dublin letting agency.

“These queues are the same at every viewing I’ve been to over the past few weeks. People need to realise the state that Dublin is in right now when it comes to housing.”

Images of rooms for rent, like those sent to Dublin Gazette, are regularly met with horror on social media.

An increasing number of images of large queues outside accommodation viewings for similar rooms have also been posted to sites platforms like Twitter, as the capital struggles to meet demand for housing.

Rents in Dublin have skyrocketed, with the regular minimum in most areas of the city coming in at around €800 per person for one room.

If you’re looking for a place of your own, it will come with a rent of upwards of €1,000, which many on a graduate, student – or worker – wage are unable to pay.

A check on Daft.ie and Rent.ie shows that the cheapest apartment in Dublin to rent currently is priced at €600pm for a small studio apartment in Phibsborough.

Advertised as a studio, images show that the apartment is actually part of a much bigger house.

When it comes to Dublin’s European counterparts, €570 per month will get a fully furnished studio in Berlin, whereas €600 per month in Barcelona would get you a furnished one-bedroom apartment. 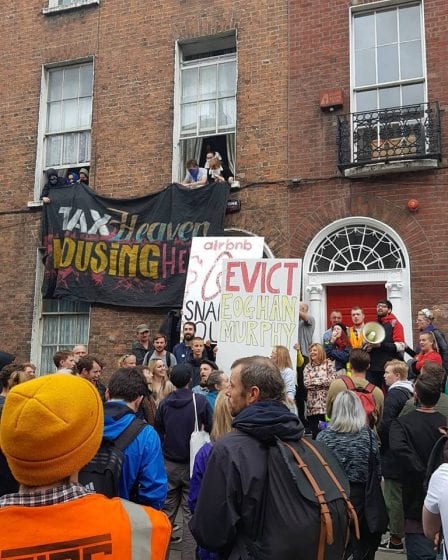 Take Back The City’s occupation of Belvedere Place.

Dublin’s housing crisis has reached boiling point in recent weeks, with groups such as Take Back The City (TBTC) occupying vacant properties in response to the lack of homes on offer.

Clashes between TBTC occupiers and An Garda Siochana last week made headlines across the nation, with the group scheduling further protests this week in response to the ‘heavy-handed’ action, including a ‘national day of action’ this Saturday against homelessness.

Minister for Housing, Eoghan Murphy, has yet to comment on last week’s clashes. The Dail will host a cross-party discussion on housing on October 3, when a Raise The Roof rally will also take place to raise awareness of the worsening crisis.

Five tenders pulled from service due to staff...

Smiles all around as travel ban lifted