Here’s a round-up of what’s been happening in the Dublin City area this week. If you have a story or event you would like covered, please contact us on news@dublingazette.com.

Monday morning saw Irish Rail add a public piano at Connolly Station, as part of an ongoing scheme to bring entertainment to commuters.
The latest in a line of pianos to be installed at stations across the city, the move follows Pearse Station’s installation last September, followed by Heuston Station in December.
Illustrated by artist Holly Periera, the design of the piano was influenced by her travels through Mexico and Poland, and their folk art. Several pianists were on hand to launch the piano, as well as John Murphy from Piano Tuning and Repair who instigated the scheme, who said: “I am thrilled that so many people are getting to play the piano in a public place and provide entertainment to the many thousands of passengers that pass through the stations every day.”

Hyatt chain to open their first hotel in Dublin in 2019

The Hyatt hotel group are set to open their first hotel in the capital next Spring.
Teaming up with the Irish-owned Hodson Bay Hotel Group as franchisees, the global brand will open the Hyatt Centric Dublin hotel – just two minutes’ walk from St Patrick’s Cathedral in The Liberties.
In line with their other premises globally, it’s set to be a four-star luxury hotel and a flagship for the group in Ireland. The hotel is planned to have 234 rooms and is due to open in March.

Traveller school to close as students set to transfer

St Thomas’ school in Clonshaugh is set to close its doors no later than next June, the Department of Education has confirmed. The school was given a ‘Special School’ designation during a period of time when provision of separate education for members of the Traveller community was the norm across the State.
However, the phasing out of this segregated education began in 2006, following the development of Government policy in consultation with Traveller representative groups.
The Department has said it has been “engaging” with the school for years in order to successfully transfer its students to mainstream schools.
In a statement, the Department said: “Following a series of discussions with the patron of the school, it is now planned that St Thomas’ Special School will close no later than June 30, 2019. Tusla’s Educational Welfare Service will provide ongoing support to the school and parents to plan for the transition of students to other schools in the area.
“This will be done with the purpose of ensuring that appropriate supports are put in place so that students who will not have completed their education by June 2019 can take up school placements in the 2019/20 school year.”
The move was welcomed by the Minister for Education, Richard Bruton; in particular, the news that the school has been given an extra year to plan for the phased closure.

Colls are happy to share a Bloom-ing calm moment 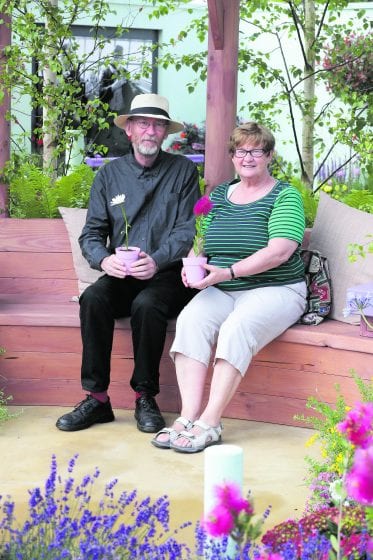 Michael and Kay Coll are pictured at the launch of the Dementia: Understand Together campaign’s dementia-friendly garden at Bord Bia’s Bloom 2018 festival in the Phoenix Park during the June bank holiday weekend.
The Moments in Time garden (designed by Newtown Saunders Ltd, TrinityHaus and Sonas apc) included a range of dementia-friendly features including plants to trigger memories such as daisies, carnations and hydrangeas.
There are approximately 55,000 people living in Ireland with dementia and this number is expected to more than double by 2036.
The Dementia: Understand Together campaign is led by the HSE, in partnership with the Alzheimer Society of Ireland and Genio. For further information on dementia supports and services, including tips for a dementia-friendly garden, see the site at www.understandtogether.ie/bloom

With festival season well under way, the HSE have issued warnings to festival-goers that might be tempted to take ecstacy or MDMA.
The warning comes after two young people lost their lives after taking drugs that were “high-strength or a bad batch” at Mutiny Festival in Portsmouth last week.
The HSE advises that it is always safer not to use ecstasy or MDMA, but if you do:
Test dose a new batch – begin with a low dose quarter pill, and wait at least two hours before using any more;
Some pills are cut with other drugs that take effect more slowly;
When buying, always know your source;
Mixing drugs and alcohol can increase the risk of unwanted side effects;
Stay with trusted friends;
Stay well-hydrated by drinking water and remember to eat properly;
MDMA can make people sexually aroused – always use a condom;
Chewing gum can help jaw cramps;
Wait 4 weeks between sessions.
For further information and support see www.drugs.ie, or freephone the HSE Drug Helpline at 1800 459 459.

DCU team off to California 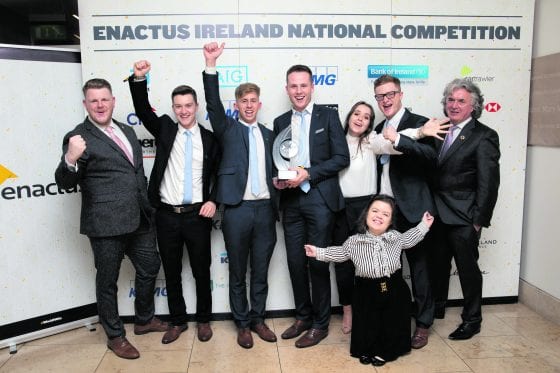 DCU’S Enactus team were crowned the winners of the national competition last week, and will now go on to represent Ireland in Silicon Valley.
The team recently defeated nine other colleges from across the country, narrowly triumphing over NUI Galway, Trinity College and the University of Limerick.
Enactus DCU will go forward and represent Ireland at the Enactus World Cup in Silicon Valley, Califoria, this October.
The innovative competition sees students, business leaders, academics and alumni come together for a showcase and celebration of the positive and innovative projects created by students at third level.
DCU presented the impacts of eight projects, with headlines projects including Second Scoop, a catering company that empowers asylum seekers, and drastically reimagines societal integration through mentorship and work experience.
Enactus chairman Terence O’Rourke said: “This year we have again seen a truly amazing range of projects and initiatives, creating real community impacts. We are very excited for Enactus DCU to represent Ireland at the Enactus World Cup.”
Pictured cheering the victory are (front) activist and guest speaker Sinead Burke; Liam Redmond (left) country manager and Terence O’Rourke (right), chairman of Enactus Ireland; and the Enactus DCU students, Robert Kelly, Thomas Hand, Daniel Kyne, Ashling McGovern and Josh Clinton. (Picture: Naoise Culhane)

Support a ball for children

A benefit ball will be held later this month in memory of a young woman who passed away from a rare form of cancer.
The Laura O’Neill Remembrance Ball will be held at Clontarf Castle on June 30 to raise funds for the Gavin Glynn foundation, which helps support the families of children up to 18 years old who have been diagnosed with a rare cancer in Ireland.
Laura was a 22-year-old who was battling a rare form of cancer – synovial sarcoma, which affects the soft tissue in the body. Sadly, she passed away last September.
Tickets for the ball, which includes a three-course meal and a prosecco reception, raffle and entertainment, are priced at €70, and are available now from Eventbrite.ie.

Enjoy the Hugh Lane from Home

Horror as knife flung into creche

22/02/2017
We use cookies to ensure that we give you the best experience on our website. If you continue to use this site we will assume that you are happy with it.Ok