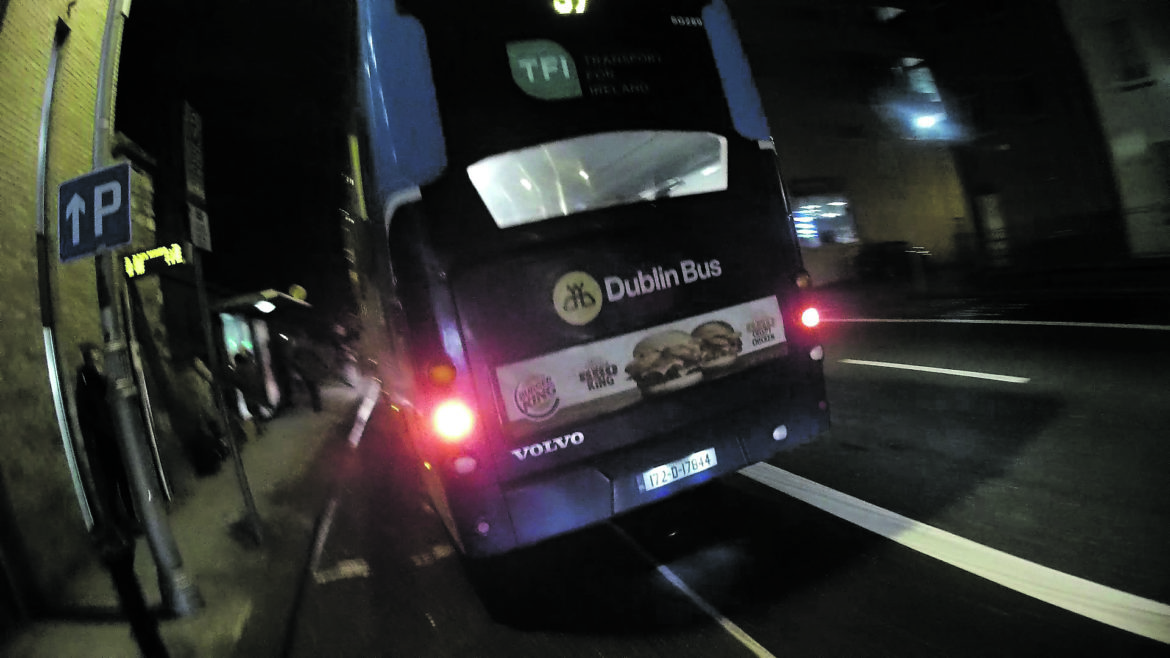 Dublin Bus has said it is investigating an incident in Stoneybatter last week, after a cyclist posted footage of a driver twice dangerously overtaking her in the bus lane.

The cyclist, Suzy, posted head-cam footage of the incident to her Twitter account on January 6, which shows the bus driver sharply overtaking her once, and then again in what is known as a ‘punishment pass’.

She posted: “On my way home from a Dublin Cycling meeting and had the joy of two close passes from Dublin Bus No 37 in Stoneybatter.

“First, he overtook me and pulled in sharply in front of me, forcing me out of the lane.

“He then did a punishment pass a few seconds later. Why risk my life?”

On my way home from a @dublincycling meeting and had the joy of two close passes from @dublinbusnews No. 37 in Stoneybatter. First he overtook me and pulled in sharply in front of me, forcing me out of the lane. He then did a punishment pass a few seconds later. Why risk my life? pic.twitter.com/RpAJgThdS3

A ‘punishment pass’ is defined as when a motor vehicle driver intentionally drives close enough to a cyclist, swerves toward a cyclist, or moves the vehicle in an effort to intimidate a cyclist or create fear of a crash or injury.

Several people voiced their concerns that incidents such as what happened to Suzy are an on-going issue across the city, leaving people hesitant to cycle in the city centre for fears for their safety, and that new regulations on safely overtaking cyclists in November haven’t been properly enforced.

New regulations came into effect on November 12, 2019, under the Road Traffic Act.

The amendment to the act reads: “A driver shall not overtake or attempt to overtake if to do so would endanger or cause inconvenience to a pedal cyclist.”

Suzy said that she has reported the incident to Dublin Bus, and will also be reporting it to An Garda Siochana at Bridewell Garda Station.

In a statement to Dublin Gazette, Dublin Bus confirmed that the incident is currently under investigation and said that “cyclist safety is of paramount importance” to the company.

A spokesperson said: “Dublin Bus can confirm that this incident is being investigated.

“All complaints and incidents reported to Dublin Bus are taken very seriously and investigated thoroughly as per the Dublin Bus Customer Charter and internal procedures.

“If a breach is found, appropriate action is taken internally.

“Cyclist safety is of paramount importance to Dublin Bus and has always formed part of our driver training process.”

My internship at Dublin Gazette