Gardai are investigating a spate of incidents in the city centre on Tuesday which saw four vehicles damaged and three people hospitalised after a driver sped along Wellington Quay.

A BMW travelling down the quays knocked off the wing mirror of a Garda patrol car, failing to stop.

The driver then continued on for a distance before smashing into the back of a taxi, which was shoved in front of a truck travelling in the outside lane as a result of the impact. 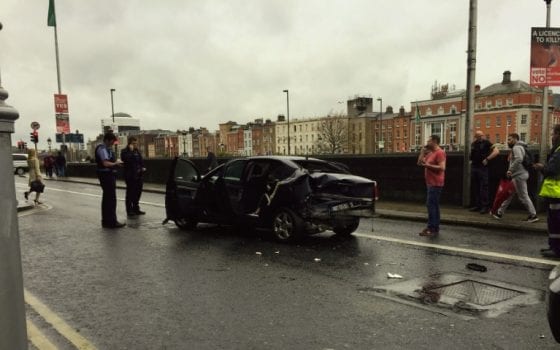 CCTV video footage of the crash appears to show that the BMW did not attempt to come to a stop before colliding with the taxi, spinning the vehicle before it stalled.

A Garda patrol car appeared on the scene immediately, believed to be the same patrol car that was clipped by the BMW driver moments before.

The driver is believed to be a man in his 20s, who was taken to St James Hospital for treatment.

Garda detectives plan to speak to the suspect when he is discharged, with criminal charges a possibility.

The driver and passenger of the taxi were also taken to St James’s with what have been described as minor injuries.

The major incident is being linked to two smaller collisions within the city centre a short time before the multiple-vehicle incident at Wellington Quay.

A Garda representative told Dublin Gazette: “Gardai are investigating the possibility that the car involved in the crash at Wellington Quay was involved in two earlier minor collisions at St Stephen’s Green and Tara Street.”

It is understood that the suspect is a law student from a Middle Eastern background, who Gardai believe may have been suffering from extreme stress that had worsened over the last week, leading to a form of breakdown. 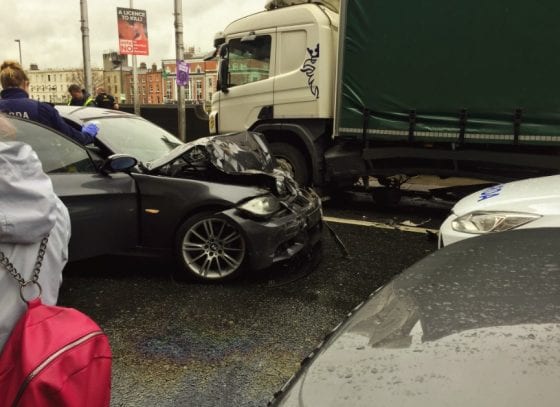 He was quickly identified, and his family immediately notified. The man’s background will be fully examined, with any contact he had in person and online recently also expected to be reviewed by detectives.

As a result of the crash, Wellington Quay was closed for more than four hours on Tuesday night, causing major delays, with the traffic ban at College Green being temporarily lifted to alleviate traffic.

Several diversions were also put in place for Dublin Bus and Bus Eireann services, with the road re-opening five hours after the incident.

Gardai are appealing for witnesses to contact them at Pearse Street Garda Station at 01 666 9000.

Wesley see off Mary’s  to make it two...