Revellers have been criticised following vast amounts of rubbish being left on the banks of the Grand Canal at the sunny Bank Holiday weekend. 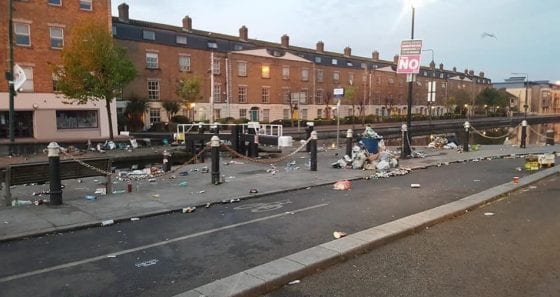 While some attempt was made to clean up, with public rubbish bins pictured in a state of overflow, a large number of cans, bottles, cardboard boxes and cups were strewn across the concrete in the primarily residential area.

Dublin City Council were praised for the quick clean-up of the dumping, but many took to Twitter to voice their disgust with those who didn’t clean up after themselves.

“Well done to Dublin City Council for having workers out so fast [on Monday] to clean the area, but some manners [from the public] and it wouldn’t be such a large task,” Tweeted Dublin Nightlife.

City centre parks were a hotspot over the weekend, with reports that litter was as big of a problem in parks such as Phoenix Park and Ranelagh Gardens as it was alongside the canal.

Cllr Patrick Costello (GP) said the littering “goes against” teaching children not to litter, and that council staff should be made available over long weekends to help with clean up.

He said: “The issue is a wider one, not just on the canal. Many of our parks also end up covered in litter, with bins not being emptied. 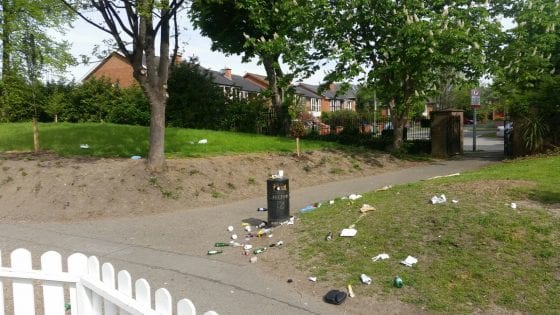 “I am told that Galway [council] provide bags at amenities areas to prevent littering on long weekends – these are all things Dublin City Council should be looking at,” he said.

There were also reports of large amounts of human urine and defecation around the Portobello area, with Labour councillor Mary Freehill saying residents have complained about the ‘terrible stench’.

“I have been contacted by residents on Lennox Terrace which is close to Portobello harbour, people were urinating and defecating in the area every few seconds as the pubs understandably wouldn’t let them use their facilities.  The smell and stench is terrible, they cannot open their windows and I am trying to get the council to clear it up.”

Ciaran Cuffe, of the Green Party, agreed with Cllr Costello, saying he asked the council to work with residents and businesses in the area to find a solution.

Cuffe told Dublin Gazette: “This dumping shows a terrible lack of consideration for the area.

“This morning I spoke with council staff and requested them to work with residents and businesses in the area to provide a coordinated approach to tackling this.”

Cllr Mannix Flynn (Ind) said that city-wide public drinking on warmer days has become a huge problem that needs to be tackled to avoid issues like dumping in public spaces.

He told Dublin Gazette: “The gardai and Dublin City Council need to step up and start enforcing the law on public drinking and on littering.

“What about all the residents and businesses left to deal with the dumping left behind? Something needs to be done.”

‘Get on with regulating Dublin city’s rickshaws’

13/06/2018
We use cookies to ensure that we give you the best experience on our website. If you continue to use this site we will assume that you are happy with it.Ok