Radical changes to the bus network right across the Dublin area are being planned, with services to be re-numbered, seven ‘super frequent’ routes created, and a move to a new, two-fare system.

It is expected that the changes will result in more people being able to access frequent services, but it will represent a huge change for passengers.

According to the plan, 11 brand-new orbital routes which will operate every 15 minutes or more will be introduced.

The main changes will see a new route numbering system being introduced, with high-frequency routes, signified by the letters A to G, followed by a digit. 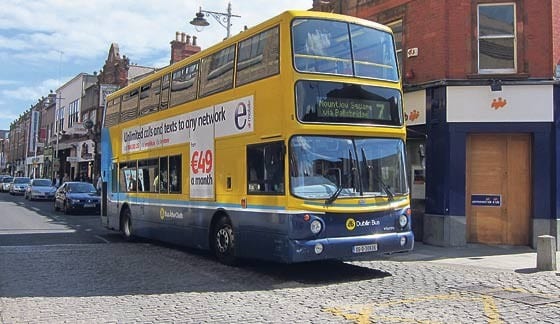 Dublin Bus is set to see a drastic change.

The NTA said there will be a two-tier fare structure – one will cover short journeys, while a second, 90-minute fare is proposed where a customer can use any public transport system (bus, Dart or Luas) for a journey, subject to the last leg commencing within 90 minutes of the start of the overall trip.

Public consultation gets under way on July 16 and runs until September 14.

Labour Transport spokesperson, Senator Kevin Humphreys, tentatively welcomed the publication of proposals from the NTA for the changes.

However, he said there must a genuine consultation with the public that takes on their views, and the result must be an affordable and efficient service.

He said the consultation should run until at least the end of September to ensure that all those impacted have a chance to make their input after the summer holidays end, and that the proposed changes should also be advertised on existing routes so that those using them can be aware of what is planned.

He said: “It is only a few years ago that Dublin Bus undertook a broad review and restructuring of the bus network, but the growing congestion on main arteries into the city shows the need for a more full[y implemented] overhaul, as I have been calling for.

“All of the proposed changes published are contingent on the Bus Connects model being delivered, and it is a radical plan that will require years of implementation.

“The proposed addition of an inner orbital route ‘O’ between the canals is particularly welcome, as the Labour Party has sought this for some time,” he said.

The Eskies: A Fun-Filled World of Craggy Sea Shanties

Coppers could be shifted for up to...

21/03/2019
We use cookies to ensure that we give you the best experience on our website. If you continue to use this site we will assume that you are happy with it.Ok