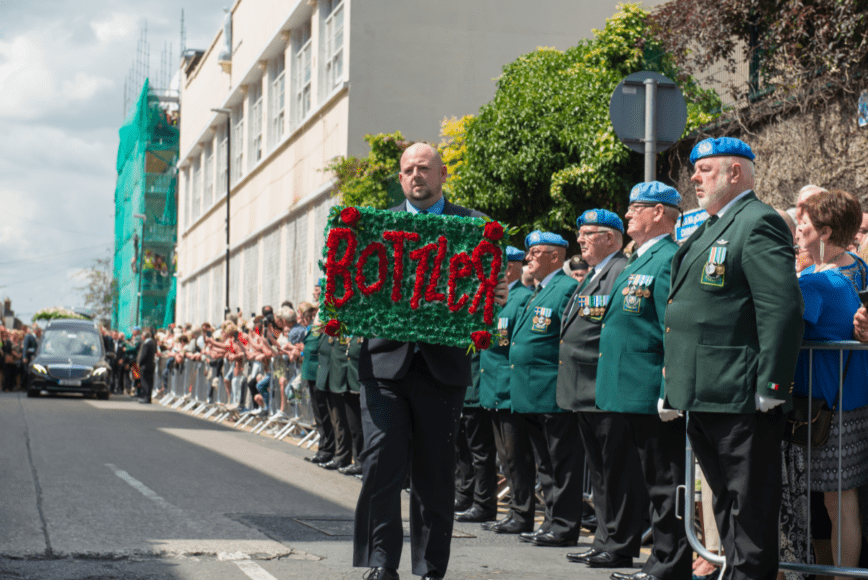 Dubliners said farewell to one of The Liberties’ finest on Monday, as comedian Brendan Grace’s funeral was held in St Nicholas of Myra church on Francis Street.

Crowds lined Francis Street from early morning to pay their respects to ‘Bottler’ ahead of the funeral mass at 1pm which featured performances from Red Hurley and Paddy Cole.

The Dublin Forget-Me-Not choir, a choir for older people affected by dementia and memory loss, who Grace was heavily involved with. Grace planned every detail of his ceremony prior to his passing last week at age 68.

Thousands of mourners lined the streets as Grace’s hearse drove through the streets of The Liberties. Well-known figures including singer Daniel O’Donnell, broadcaster Marty Morrissey and former Taoiseach Bertie Ahern were all in attendance at the funeral.

Chief celebrant of the funeral mass, Father Brian D’Arcy, told mourners that the ceremony would be a ‘Dublin saunter’ through the life of one of Dublin’s best-known funny men, best known for his role as Father Fintan Stack in Father Ted.

The ceremony blended moments of sadness and mourning with those of wit and laughter, with Father D’Arcy referencing that the funeral reflected Grace’s stand up shows. “You went to a [Brendan Grace] show and you laughed, and you cried. It’s the same today – we’ll grieve, and we’ll laugh.”

Father D’Arcy said: “Everybody loved Brendan Grace, whether they were Protestant or Catholic, young or old, educated or non-educated. He unified the country and send them home with a smile on their face.”

One of Grace’s final wishes were that his remains were to be carried from the church to the sound of his own voice singing Dublin In the Rare Auld Times, with the hundreds of mourners in attendance encouraged to join in.

The hearse was led through the gates of the church after the three-hour ceremony to the sounds of Molly Malone being playing on the bagpipes as the crowds sang along and applauded Grace and his family as they left the church.

15 years on, Sallynoggin Pearse might finally be getting a new clubhouse