Rickshaws face the end of the road

Minister for Transport Shane Ross brought a proposal to ban rickshaws in the city to the Oireachtas Committee on Wednesday.

Ross reported a ban on rickshaws, stating that regulation of rickshaws would be too expensive, leaving a ban as the only other viable alternative.

Minister Ross believes that new laws would be needed to regulate the transport mode, such as licencing, taxes and fare regulations, as well as an NCT-style test, and that banning them outright is more viable. 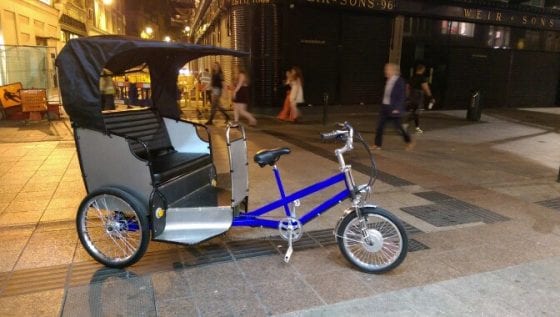 In front of the Transport committee, he said: “The biggest concern for me is the challenge around defining the rickshaw vehicle in law. The rickshaw is driven on the public road.

This means – if we want to regulate them, we first have to amend Road Traffic legislation.  Since there is extensive litigation under that legislation, we have to be very exact as to how we define a vehicle.

As we know, there are different types of rickshaw – some are pedal-powered and some have a motor.  The NTA advises that pedal powered rickshaws can easily be converted to motorised.  Within minutes in fact, by attaching a small motor to the back axel.  The motor can be removed just as quickly.

All this means that any new legislation for rickshaws will need to be developed with extreme care.  The new regime will bring benefits, of course.  But it will be costly to implement. And it may well prove difficult to enforce in a meaningful way.”

Previously, Minister Ross has said he was “actively working to address public concerns” and was analysing results of a public consultation conducted by the National Transport Authority (NTA).

Speaking before the committee, Minister Ross listed a number of concerns regarding rickshaws including dangerous driving, passenger safety and criminal activity.

He said that 154 rickshaw drivers have been arrested in the past 18 months under the Misuse of Drugs Act – possession of a controlled drug for sale or supply – in the Pearse Street District alone, whilst driving a rickshaw.

The NTA Survey, requested by Ross, also revealed that 57% of rickshaw passengers reported accidents or near misses. 44% of passengers in the survey also reported issues with the charges.

Minister Ross didn’t confirm a full ban in the hearing, however, he said he would have a preferred decision on his next move regarding the bike cabs before the end of Dáil term.

The Green Party have called on Ross to regulate rather than ban rickshaws, saying they’re part of our ‘tourism offering’.

Councillor Ciarán Cuffe, who chairs Dublin City Council’s Transportation Strategic Policy Committee said: “Regulation of rickshaws is clearly needed but it seems that Minister Ross is set to choose the ‘killjoy’ option of banning rickshaws. This would be the wrong move as rickshaws are part of our tourism offering.

“Instead Minister Ross should ensure that rickshaws have a clear registration plate, and that the drivers carry insurance. Regulation isn’t rocket science, and we’re suggesting that Minister Ross and his officials sit down and come up with a clear and simple plan for regulation,” Cuffe said.