A national organisation for LGBT young people celebrated its 15th anniversary on Monday with the launch of its annual report for 2017.

BeLonG To youth services launched the report with Minister for Children and Youth Affairs, Katherine Zappone.

BeLonG To was established in 2003 in Dublin, and soon grew into a nationwide organisation.

Last year, 37 groups across Ireland were supported by the group, and LGBT young people were connected through peer support groups, led by professional youth workers. 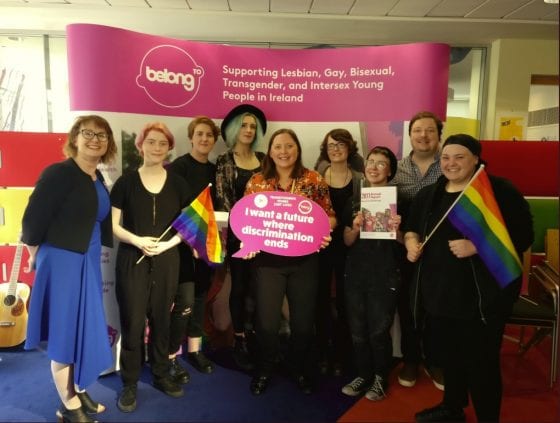 Moninne Griffith, executive director of BeLonG To Youth Services, said Ireland was a “different country” 15 years ago, and that the organisation have helped “shape government policy”.

She said: “15 years ago, Ireland was a different country for lesbian, gay, bisexual and transgender young people.

“Since we opened our doors in 2003, we have transformed what it means to be an LGBTI+ young person in Ireland by offering a safe space, advice, and life-saving support for young people, and by reducing stigma, isolation and fear of rejection through changing hearts and minds about sexual orientation and gender identity.

“Today, we are celebrating 15 years supporting and empowering LGBTI+ young people, their families, and communities.”

In 2017, the organisation opened two new services in their Dublin flagship offices, aiming to support the level of mental health challenges that those attending BeLong To services might experience.

Partnering with suicide and self-harm prevention charity Pieta House, it introduced a free counselling service for LGBT people who may be thinking of suicide.

It also introduced Monday Chats – a weekly one-on-one support service aimed at providing information for young people, parents and professionals, as well as advice and support.

According to the LGBT Ireland report, LGBT young people are three times more likely to attempt suicide, and twice as likely to self-harm, compared to the general population of young people.

Speaking at the launch of the report, Minister Zappone said: “BelonG To offers compassion, support and solidarity. It is a vital service and as a campaigner, advocate and independent minister I support this work.

“In the coming weeks Ireland will again show leadership with our new LGBTI+ National Youth Strategy.

“It is the result of a consultation process which listened to more than 4,000 young people.”

Rickshaws face the end of the road

Business is booming in Dublin 8 as...

14/02/2019
We use cookies to ensure that we give you the best experience on our website. If you continue to use this site we will assume that you are happy with it.Ok