The amount of rubbish bins on the city’s streets could be reduced by as much as 20%, as it was announced that Dublin City is set to get 800 solar-powered bins.

The solar-powered compactor bins have the technology to crush rubbish, which means they can hold a larger amount of waste than traditional bins.

So-called ‘smart’ bins also have the ability to provide real-time information to waste collectors to inform them when the bin is full.

The bins automatically send a text and email to waste management when a bin reaches 85% capacity, preventing unnecessary collection runs. 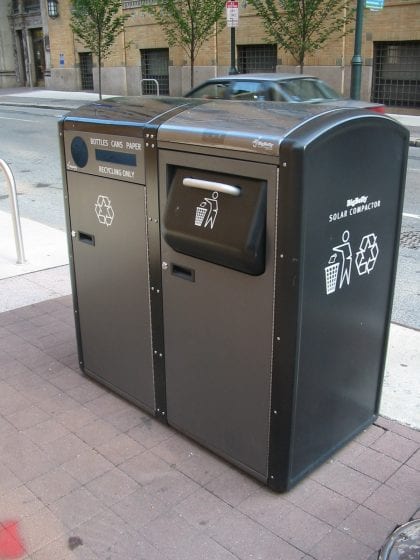 The bins can provide the council with other information such as air quality, sound monitoring, and in some cases can provide wifi within a 25m radius.

Dublin City Council trialled 48 of the bins across the city, and put out a tender for the contract in 2017.

Graeme McQueen, representative of Dublin Chamber, said: “It’s really good news for Dublin that more of the Big Belly bins are going to be placed around the City Centre. It’s fantastic to see smart technologies being used to make the city a better place for people. The Big Belly bins are really popular. We already have a number of them scattered around Dublin – although their rollout has been frustratingly slow in recent years. Hopefully we’ll soon see them in all parts of the City Centre.

“The issue of over-flowing bins and rubbish remains a big one for the city. Too many parts of the core City Centre are still far too dirty. These new bins will hopefully help address that issue.”

Kyron Street, an Irish firm, have been awarded the €2 million contract to provide the smart bins across the city centre. They are the Irish supplier of ‘Big Belly’ bins, a US company which originally developed the bins.

Cllr Dermot Lacey (Lab) told Dublin Gazette: “I welcome any measures that are economically and environmentally sound and that contribute to a better city. I hope they work.”

The contract is part of the ‘Smart Dublin’ project, which aims to bring in smarter technology across Dublin’s four local authorities.

Cllr Ciaran Cuffe (GP) said the bins will help the council “make the best use” of staff.

He told Dublin Gazette: “The good news is that they tell us when they’re nearly full, so we can make the best use of our staff to ensure that they’re emptied when needed.”

Anger over arson attack on property being...

14/12/2017
We use cookies to ensure that we give you the best experience on our website. If you continue to use this site we will assume that you are happy with it.Ok