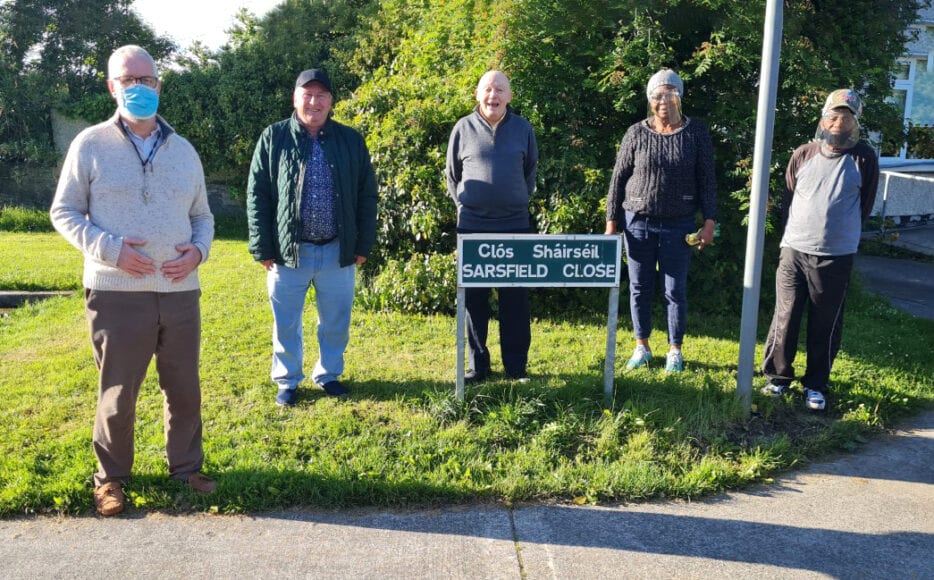 Residents at Sarsfield Close in Lucan village are hard at work on their communal garden in the face of recent antisocial behaviour from youths in the area.

Over the last year during lockdown, residents in the apartments at Sarsfield Close, many of whom are elderly, have been intimidated and harassed by gangs of young people drinking and smoking in the stairways.

Speaking to the Dublin Gazette this week, local resident Michael said that he refuses to allow the gangs to continue to intimidate them and to bring the area down.

Michael and a few others recently fully vaccinated residents at Sarsfield Close have taken up gardening, planting flower beds and cleaning the area around the apartments.

He has raised the issue of antisocial behaviour in the area with local councillors and TDs and he has been referred to the gardai several times.

In recent weeks he said that gardai in Lucan have arranged a community garda liaison to check in with residents as well as a garda patrol around the area a few times a week, which seemed to help until the gangs of youths returned.

Another resident Tracey described how the residents feel like they are ‘living in fear’ but that the gardening work organised by Michael is really lifting their spirits as a community.

Joining Michael in the gardening work is Jimmy, who helps to cut the grass. “I help Michael cut the grass and do the gardening, I really enjoy it,” he explained. Jimmy described the recent antisocial behaviour in the area as ‘scary’ but that the residents want to look after their home by focusing on the gardening.

Michael says that the council has helped to sponsor materials for the garden and that they were given a small budget. He thanked local councillors Paul Gogarty and Eoin O’Brion for their support, with a motion recently proposed by Cllr Gogarty passed to get the council to consider installing doors between the stairwells to help ward off antisocial behaviour and for improved lighting.

“We need patios and chairs for the elderly residents and a good power hose to get rid of moss, so any help would be appreciated,” said Michael.