A six-year old girl was rushed to hospital last week after accidentally standing on an abandoned syringe as she waited for the bus.

The little girl was on her way home from school and was playing with a friend on rocks outside Ballymun Shopping Centre. She stood on the used syringe by accident, and the needle went through her shoe and pricked her foot.

She then was brought to Temple Street Hospital for blood tests.

Her mother, Sasha Penrose, made the post in a Ballymun Facebook group to bring attention to the syringes that are being repeatedly dumped in Ballymun.

Several other posts have previously been made in the group regarding the high level of syringes left in Ballymun by drug users.

Some other residents have said their children have also been pricked by syringes.

In the comments of Penrose’s original post, Catherine Leonard said that her daughter was pricked by a needle while she was playing last year.

This happened after a bag of ‘ten’ dirty needles was dumped just outside their garden.

Leonard said her daughter also needed to be brought to hospital, as there was blood in the used syringe that pricked her.

“Getting Out of Hand”

There was also a picture of several used needles and abandoned drug paraphernalia posted by resident Mary O’Connor. 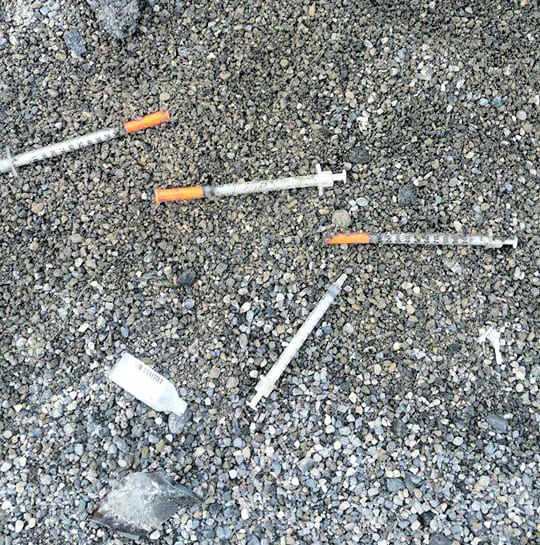 The picture of dumped drug paraphernalia posted by Mary O’Connor to the Ballymun Facebook group.

She said they were abandoned in Shangan Park, near a stone that is frequently played on by children.

A number of locals commented that the level of drug use, selling and drug-related litter is “getting out of hand”.

“People in Ballymun are Angry”

Ballymun councillor Paul McAuliffe (FF) told Dublin Gazette there has been a “significant increase” in the level of drug dealing there in recent months.

He said: “We have the combination of two issues here. The first is a poor level of street cleaning being carried out, and secondly, a significant increase in the level of drug dealing in the Ballymun area in recent months.

“We have to get real and provide a decent level of service to people in the Ballymun area. It’s just not good enough that there isn’t more regular street cleaning from Dublin City Council, particularly when we know that this area is being used to deal drugs.

“I can’t describe how angry people in Ballymun are about the recent upsurge in drug dealing.

“It spilled out at a recent meeting of the Ballymun safety forum. I have written to the [Garda] chief superintendent demanding that the area is flooded with police. We need to clamp down on something which will become even more serious if we don’t tackle it now.”

Dublin Gazette contacted Dublin City Council about the issues raised, but a spokesperson was unavailable for comment.

Cosgraves butchers a cut above the rest for...

Get ready to holiday again this summer

Swords Kids Do their bit for Temple St...

Case of E.coli for Balbriggan swimmer