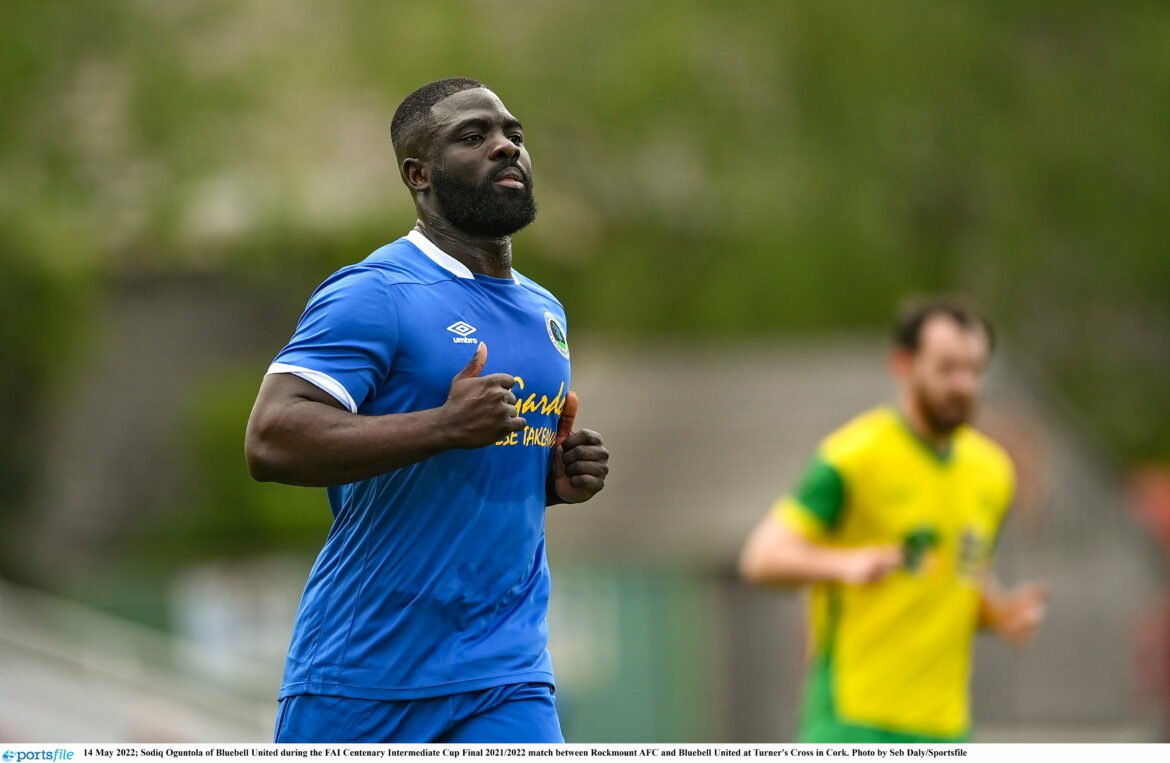 Glenavon FC have plucked a perfectly polished diamond ready-made to sparkle across their frontline from the LSL according to Shane Dolan.

The Irish League outfit’s search for a strike once again ended in Senior Sunday as Sodiq Oguntola follows a path trodden by Greg Moorehouse and Josh Doyle in trading the Intermediate top flight for the Irish League club.

The striker who scored 15 goals in his final 11 games of the season was recommended by a man who knows all about scoring goals at both Irish League and Senior Sunday level, not to mention a man that knows all about Oguntola and Glenavon, Shane ‘Mario’ Dolan.

The former Bluebell United manager, who has played up front in professional and amateur football across the county has a strong working relationship with Glenavon manager Gary Hamilton and coached ‘Drogba’ in his most prolific campaign.

He was only too delighted to make the introduction and believes it will be a match made in heaven.

“I think he’ll do very well. Obviously, I have a very strong relationship with Glenavon’s coaching staff and management team. I do a lot of scouting for them in the Leinster Senior League and the League of Ireland. I knew Gary was looking for a physical center forward so  I recommended Drogba.”

Dolan, who previously pointed the Bet McClean Oval side in the direction of teen attacker Doyle, believes the 29-year-old fits the remit perfectly and says Glenavon get the talented goal scorer at the right time.

“I know from playing in the Irish league myself that it’s a lot more physical and fast-paced than the League of Ireland,”he added.

“I tend to think the League of Ireland is a lot more technical, that’s not disrespectful that the Irish League, it’s just more physical up there.

“I’m sure any centre-half that’s come up against Drogba this season will say he’s a big strong lad.

“But he has a lot more to his game, he  had a lot of assists this season and he can score all types of goals, volleys, 35-yard strikes into the top corner, tap ins, and headers.”

Oguntola hasn’t quite just burst onto the scene this season, he is 29 years of age and his talents have led him to professional football previously. However, his stays at Shelbourne, Athlone and Cabinteely were not prolonged ones.

Dolan is confident this move will be more successful, suggesting ‘Drogba’ attacks the pros with more strings to his bow this time around.

“He’s added a lot of maturity to his game and a work rate that may not have been there in the past. From the start of the season I spoke to him about what was expected of him.

“Everyone knows he can finish and about his touch and his awareness, he’s one of the best finishers I’ve worked with, but it was his all-round game he needed to brush up on. He needed to work on link-up play, hold-up play and pressing from the front. He took that on board and grew and grew into that role and he was exceptional for us.

“It got to a point where his work rate was phenominal and set the tone for the rest of the team – and he went on a fantastic run of scoring goals with 15 in his last 11 games.

“I think the main difference to the Drogba that was in the league of Ireland to the Drogba that’s going up there now is he’s a lot more mature, he’s absolutely ready and he is going to be a brilliant signing for them.”