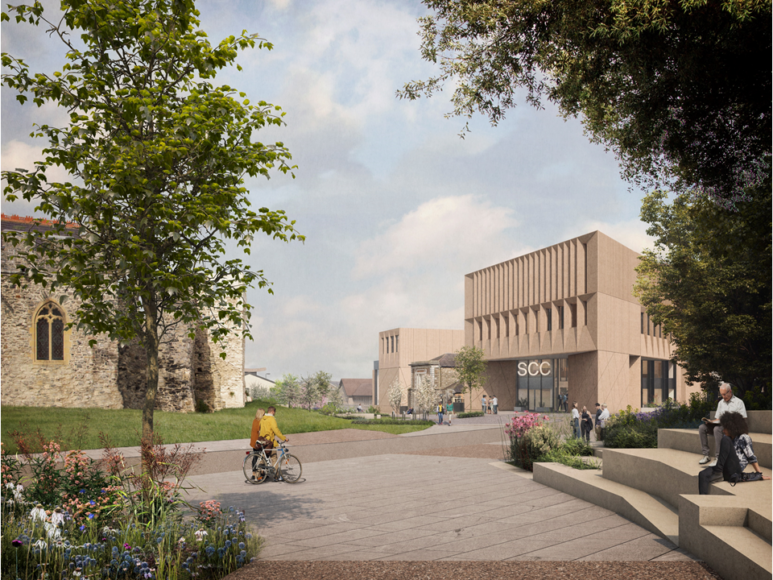 Councillors were informed at last Monday night’s council meeting that a Part 8 planning process will commence on Thursday (July 7)for the new centre which will be located at the junction of North Street and Seatown Road, beside Swords Castle and County Hall, in the centre of Swords.

The new Centre, which has been designed by an Integrated Design Team led by award winning architects John Tuomey and Shelia O’Donnell, will be a four-story building covering 5,700 square metres and featuring a new County Library, a tourist office, a gallery and a 165 seat multi-functional theatre.  The plans also include a new design of the public realm around Swords Castle and County Hall.

The Mayor of Fingal, Cllr Seána Ó Rodaigh, said: “This is a major flagship project for our county town and will provide not only a much-needed county library and tourism office but also a major arts space including a Black Box theatre. The proposed design will create an iconic building which will be enjoyed not only by the people of Swords but citizens from across Fingal and beyond.”

Chief Executive of Fingal County Council, AnnMarie Farrelly, said: “This is one of the most significant milestones in the Capital Programme and represents a major investment in our County Town. We now have a schedule in place which, if all goes well, will see construction commence in the second half of 2023. This project is connected to the Sustainable Swords Strategy and, between them, they will transform the area along Main Street and improve connectivity between the centre and the rest of the town.”

The Sustainable Swords Strategy is a key part of Fingal County Council’s plan to ensure that, as Swords continues to expand, the town grows sustainably and develops into well-designed county capital. It will focus on reversing the historic shift away from Main Street, which commenced in the early 2000s, in order to facilitate better placemaking and create a more resilient town centre.

Fingal County Council has already completed a Health Check of the works programme, a Public Realm Strategy, a Transport Strategy and a Business Case Evaluation of key transformative projects and will unveil its Sustainable Swords Strategy in September when it is presented for public consultation.