Escooters to be an established fixture in Dublin by next year 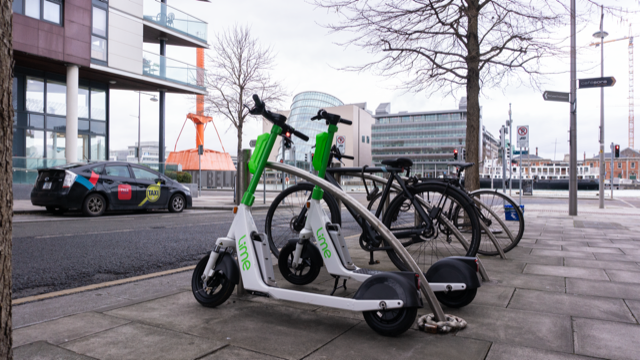 They’ve rapidly become a fixture on Irish roads, cycle lanes and sometimes even pavements in recent years but as legislation appears set for 2023, what role will electric scooters and its service providers play in Dublin’s sustainable transportation landscape?

Rachel Cunningham caught up with Hal Stevenson, Lime’s senior public affairs manager, to get the buzz on these rechargeable electric vehicles.

Upon the legalisation of commercialised escooters, Mr Stevenson assured the Dublin public that the city streets will not turn into “the Wild West”.

“Ten providers can’t just put down hundreds of vehicles, that’s not how it works. And that is better for cities because you’re not having an unregulated service that you can’t control.

“In most cases, the legislation is almost the starting gun. We’ll have background conversations with local authorities where we’ll outline the services we can offer; how we’ll run them, the benefits they’ll bring, but we can’t really have meaningful conversations, or specifically procurement processes, around a service that isn’t yet regulated”, he explained.

“Our ambition would be to open up a warehouse, if we’re successful [in winning Irish contracts] and then making loads of new hires. You need a huge amount of people on the ground who are sort of constantly patrolling, checking the fleet are working safe and up to standard”, UK and Northern Europe senior communications manager, Ellie Bird stated.

The transportation company, founded in the United States with its European headquarters based in Dublin, thinks it’s in with a fighting chance of winning Irish contracts, following legislation. “We operate in over 250 cities all over the world and have done over 250 million rides across those bikes and scooters, so are the world’s largest provider.

“What makes Lime unique is that we have licenses to deploy these vehicles in these major cities. So, when you come to London, you can’t just go ahead and put vehicles on the street. You have to win contracts, and that’s what you’re seeing in Ireland at the moment prior to legislation being put forward that will legalise them”, the public affairs manager said.

Mr Stevenson estimated that, following legislation in early 2023 and procurement processes, transport companies will be launching operations next spring or summer “It’s a bit like trying to predict the end of the race when you don’t know when it starts”, he commented.

Regarding Lime’s contribution to the Irish regulatory process, he said: “We had a really good session with the joint committee on transport and communication. There were a few other providers, which was probably one of the clearest indications of the level of interest the industry has in Ireland as a market. There were maybe between five to 10 operators giving evidence, which is great because it means that the legislation is going to be really well-informed.

“It’s important that legislators aren’t just listening to operators, they also took views from a wide range of stakeholders, including disability groups, a number of which we work with on our disability advisory board in Ireland as well. So, we certainly had the opportunity to engage with ministers and the good thing is that everyone seems aligned and understands how to regulate this in a way that will have sustainability benefits.”

He underscored the need for legislation to progress, claiming that the longer it is delayed, the fewer sustainable sustainability benefits will be realised. “There’s also a safety impact because, at the moment, you have private unregulated vehicles that don’t have the same safeguards as we have on the roads and we’ve seen in the UK that that’s led to a small number of serious incidents and road traffic accidents and you absolutely wouldn’t want to have that happening in Ireland”, he added.

One potential aspect of regulation that the electric vehicle provider has been vocal in criticising would be if driving licenses were required to be held by escooter users. “The whole idea is you’re taking people out of their cars, offering them a more attractive sustainable form of transport that might appeal to them more than say a bike or an ebike, which are obviously already regulated and available. If you’re requiring those people to have driving licenses, you’re not providing an alternative.”

“If you limit user-ship to license holders only, you’re limiting your ability to deliver sustainable impact, is our concern”, Mr Stevenson said.

The public affairs manager outlined how Lime has invested money as well as time in Ireland and how the company has engaged not only with Dublin’s local authorities but nationwide. “Our European headquarters in Dublin, so Dublin is always going to be a market of significant interest to us. We’ve invested €10m across an 18-month timeline to go ahead and the thing that is slightly delaying us at the moment is the legislation because the last thing you want to do is put a two-year lease in on a warehouse and, during the first 12 months, escooters aren’t legal yet. So, we’re in a little bit of limbo at the moment, but that investment has been committed.

“Dublin is a focus but we want to be operating all over Ireland; we’ve had conversations with Limerick that conversations, in Cork, even talking to the smaller, rural local authorities around e-bike pilots and things like that. The way that our services actually make a sustainability difference is by operating on a wider scale”.