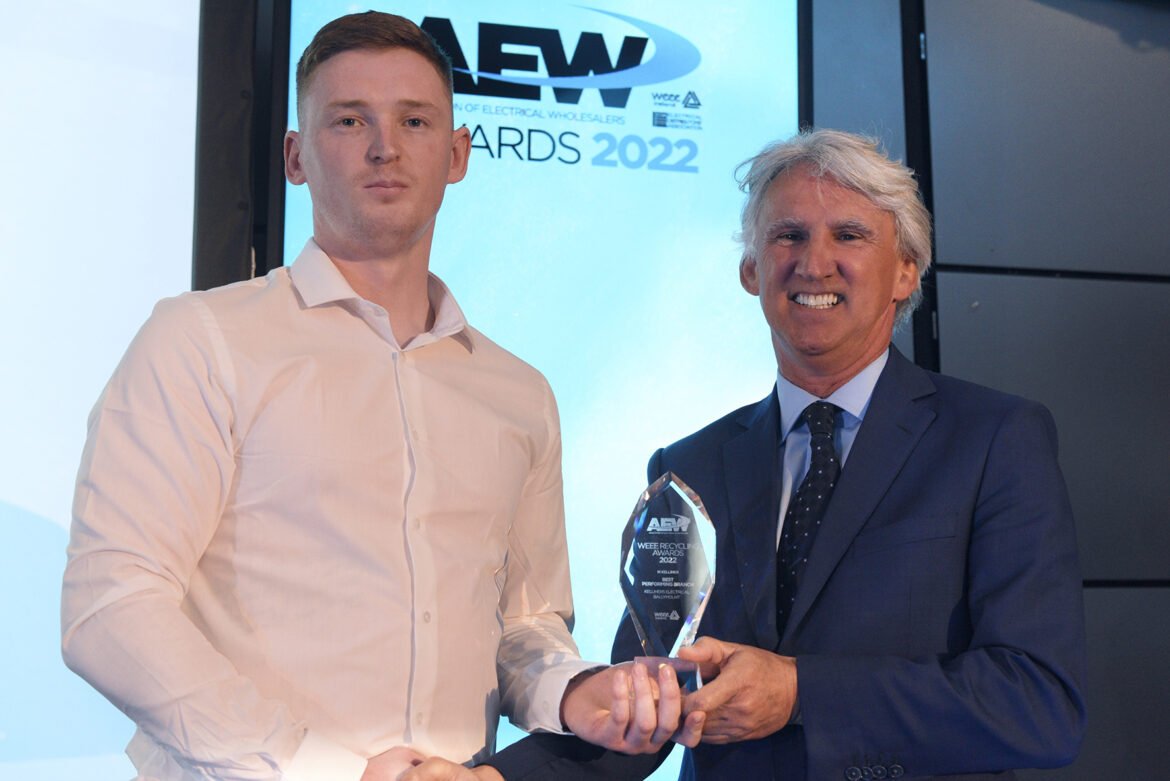 Two businesses in Dublin have scooped awards for lighting recycling at Ireland’s electrical awards, hosted by the Association of Electrical Wholesalers (AEW).

CEF’s Finglas branch and Kelliher’s Ballymount branch both won ‘Best Performing Branch’ respectively for their group due to their sustainable business practices when it comes to recycling waste electrical and electronic equipment (WEEE) in 2021.

Sponsored by WEEE Ireland, the awards, held in Dublin recently, were distributed across the six wholesale trade buying groups that form the AEW – CEF, EWL Electric , Fegime, IEBG, Kellihers and the Independents.
“WEEE Ireland is the only lighting recycling scheme in Ireland and has been working on behalf of the lighting sector to organise the collection and recycling of waste lighting for the past 16 years,” said Leo Donovan, CEO, WEEE Ireland.

“The WEEE Recycling Awards, which are part of the AEW Awards, recognise and reward green, sustainable business practices amongst AEW’s 130 members across Ireland.

“A huge well done to all twelve winners whose recycling efforts enable their customers to easily return and recycle waste lighting, delivering a positive impact on the environment over the long term.”

“We are delighted to be awarded for our efforts in ensuring waste lighting from our customers is properly recycled,” said James Eady of CEF’s Finglas branch.

“Not only is it a boost for the business and my colleagues to have our efforts recognised, but it is always rewarding to know that we are making a difference to the environment, in our own small way,” added Chris McDonagh of Kelliher’s Ballymount branch.

Ken Legros, President, AEW, said AEW and its 130 members work closely with WEEE Ireland and Irish Lamps Recycling to improve WEEE recycling performance in the industry, by driving lighting take back and recycling awareness across the electrical wholesale and trade sector.

“The awards are a great way to celebrate and recognise the best performing electrical wholesalers in lighting recycling and, hopefully, will inspire all AEW members to re-double their WEEE Recycling efforts in 2022,” he said.

Chris McDonagh of Kelliher’s Ballymount branch accepting the award for ‘Best Performing Branch’ from Leo Donovan, CEO of WEEE Ireland at Ireland’s electrical awards hosted by the Association of Electrical Wholesalers and sponsored by WEEE Ireland.