Following the blaze at Metro Hotel in Ballymun last night, Dublin Fire Brigade have been praised for their quick response to the high-rise fire.

Lord Mayor of Dublin, Mícheál Mac Donncha, commended the ‘efficiency and courage‘ of the crews that sped to the scene. 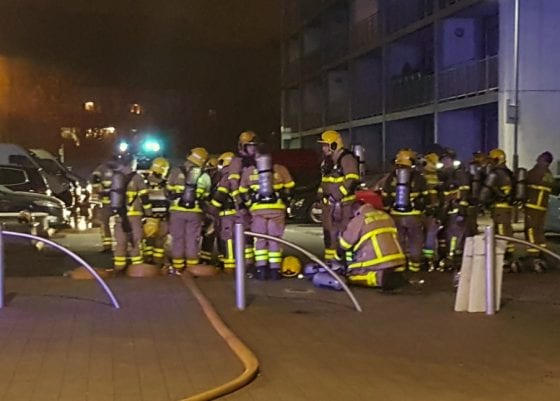 Dublin Fire Brigade responding to the fire at Metro Hotel in Ballymun.

“On behalf of the people of Dublin City I commend Dublin Fire Brigade for their rapid and effective response to the Metro Hotel fire. They helped to ensure that there were no casualties in what was a potentially catastrophic fire in a high rise building.

“The efficiency and courage of the Dublin Fire Brigade crews was demonstrated last night and the people of the City are very grateful to them. We must now ensure that all aspects of this fire are fully investigated,” the Lord Mayor said.

Dublin Fire Brigade tweeted that over 60 firefighters and eight fire engines responded to the fire, which was initially reported around 7pm last night.

At the #BallymunFire we had:

A local told Dublin Gazette that they could see the fire as their plane landed home in Dublin Airport last night, and that the smoke from the blaze was visible in the surrounding around Swords and Ballymun.

There were no reported injuries in the incident, with all residents of the hotel reported to have been safely evacuated.

Pictures posted online by the Phibsboro branch of the fire brigade show that the building has been completely gutted on the floors where the fire took place.

The cause of the fire has not yet been determined.

Cuala live to fight another day after Moran’s heroics

Statement on the introduction of public health measures...

Statement by An Taoiseach, regarding the spread...

13/12/2019
We use cookies to ensure that we give you the best experience on our website. If you continue to use this site we will assume that you are happy with it.Ok