Man pushed woman in front of traffic in a random attack

A man who pushed a 62-year-old woman in front of busy traffic during a random Dublin city centre attack has been given a suspended sentence.

Marcus Klug (37), of no fixed abode, screamed at the woman as she walked past him on George’s Street before pushing her onto the road in front of oncoming traffic, Dublin Circuit Criminal Court heard.

The woman, who was on her way home from her work as a care assistant, avoided being run over but suffered a fractured arm as a result of the incident.

Klug pleaded guilty to one count of assault causing harm to the woman on October 29, 2013. He was suffering from psychiatric issues at the time and was not fit to plead to the charge for some years, the court heard. 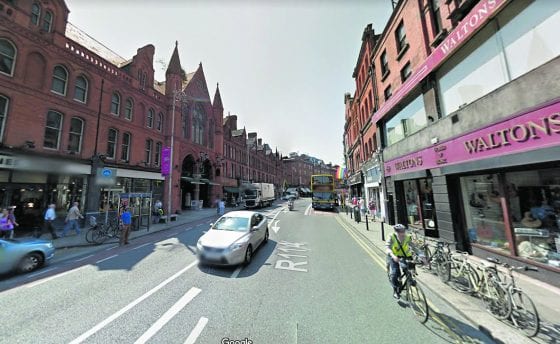 Since 2013, he has spent 23 months in Cloverhill Prison and in a locked ward in St Vincent’s Hospital. He also spent some time living in community care.

He noted he had received appropriate treatment for those issues. He ordered Klug to remain under the care of Probation Services for two years and to do what his psychiatrist tells him.

Garda Aidan Monahan told John Byrne BL, prosecuting, that the woman had left work and was walking along George’s Street on the afternoon of the day in question when a man she didn’t know suddenly “screamed like an animal” at her.

He then pushed her, causing her to fall onto the busy road. Passers-by came to the woman’s aid and gardai were called. The woman was taken to hospital where she was treated for a fractured arm.

A witness to the assault said he heard Klug shout: “I’m going to f***ing hit someone,” before he pushed the woman.

Klug was arrested after gardai spotted him on nearby Clarendon Street.
When questioned about the attack, he replied: “Yeah, I tripped her up. She fell. It’s only movement.”

He was deemed unfit for interview due to his agitated mental state, the court heard.

Klug has eight previous convictions, including for assault, burglary and public order offences.

In a victim impact statement handed into court, the woman said she suffered great distress in the wake of the incident.

Her arm required several months of physiotherapy treatment but was now fully recovered.