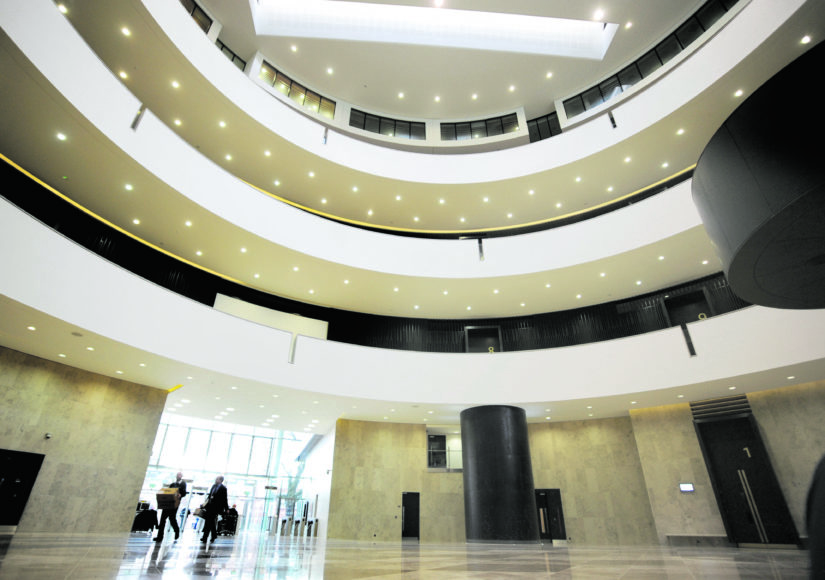 A detective who spotted a bloodstained post-it note fall from a robber’s pocket while reviewing CCTV was able to match DNA from the note to the perpetrator, a court has heard.

Samantha Irwin (36) dropped the post-it as she robbed €55 from a shop assistant while armed with a syringe. The note contained the numbers of out of hours homeless accommodation services.

Detective Garda Michelle Fitzpatrick, who spotted the note, agreed with defense counsel that her impression was Irwin was a decent person who had made catastrophically bad choices.

Irwin, who described her life as “out of control”, has now sought help in addressing her drug addiction.

Det Gda Fitzpatrick told Maurice Coffey BL, prosecuting, that Irwin had entered the shop, spent about ten minutes browsing and waiting for customers to leave before approaching the counter with an item.

Irwin grabbed the shop assistant by the jumper, uncapped a syringe and attempted to strike her in the arm. The shop assistant managed to remove her arm by pulling it up and out of her jumper.
Irwin demanded money and a total of €55 was handed over by the woman and her manager.

CCTV footage of the robbery was aired on RTE’s Crimecall and Irwin was identified by three gardaí. The DNA evidence from blood on the note was also a match to Irwin. No money was recovered.

The shop assistant said in her victim impact statement that she now works only day shifts and is afraid to be in the shop alone. She feels anxiety about what could have happened.

Sarah Jane O’Callaghan BL, defending, said her client had a troubled background and began using drugs at a young age.

She said Irwin later got her life together had been doing very well. She managed to complete her Leaving Certificate, the only person in her family to do so, and spent six years in the army.

She met her partner and they had set up a business together. She completed a business management course, coming first out of 106 students. Her partner then died suddenly of adult death syndrome.

Judge Melanie Greally adjourned sentencing to March 5, 2020 when a full plea in mitigation will be given on Irwin’s behalf from her legal team.

Paul Merrigan, of Merchants Quay Ireland, said Irwin had come to them for help with her substance abuse. He said she told them her life was out of control and the substances were controlling her. He outlined that she was due to be assessed for an 11 week residential treatment program.

Irwin also pleaded guilty to possession of two shotgun cartridges at her bedroom at Haven House hostel on April 12, 2019.

Det Gda Fitzpatrick said a search of Irwin’s accommodation was carried out in April 2019 and two shotgun cartridges were recovered. Irwin told gardaí she had taken a jacket home belonging to a friend the previous Christmas and the cartridges had been in the pocket.

The garda agreed with Ms O’Callaghan BL that Irwin had given gardaí the name of her friend, who had a firearms certificate and confirmed she had been in his house.

Near FM: This week’s City and Fingal News

Burglar broke into Supermacs with underpants over his...

Rapist who broke into women home armed with...

Man gets five years for knife attack on...